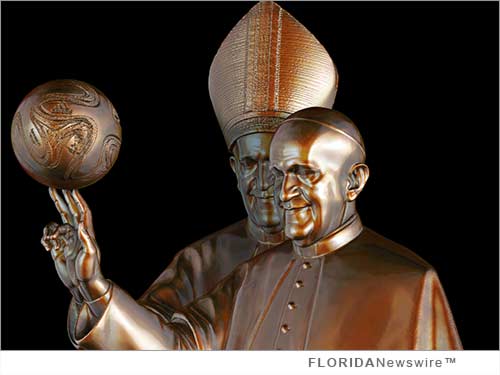 "Spirit of True Fraternity and Gay Pride," a life-size vinyl banner, portrays the pope who said, "Who am I to judge a gay person of goodwill who seeks the Lord?" Pope Francis is depicted wearing his white zucchetto, embraced from behind by another version of his self wearing the miter.

Both pope depictions display serene smiles while each give their blessings with their right hands, as an official FIFA World Cup soccer ball balances on fingers posed in the gesture of benediction.

"I wish everyone a wonderful World Cup, played in a spirit of true fraternity," said Pope Francis last month. The pontiff also said he hoped the World Cup would mark "solidarity among peoples" who "recognize themselves as members of the unique human family."

Pope Francis' advice regarding solidarity and fraternity of good sportsmanship comes at a time of prevailing fan intolerance in international soccer. Openly gay players are virtually non-existent on the international level because teams either do not allow it, or teams fear the backlash of physical violence to which their players may be subjected by the xenophobic fans of opponents.

"The timing of World Cup soccer and the Gay Pride celebrations in June and July seem appropriate, as both aspire to gain acceptance for the spirit of true fraternity," said Cory Allen.

"Spirit of True Fraternity and Gay Pride" will be unveiled at CACA's The Showroom in St. Petersburg, Florida in month and the African-American and Latin Gay Pride, Miami Beach Bruthaz, July 17 to 20, 2014.