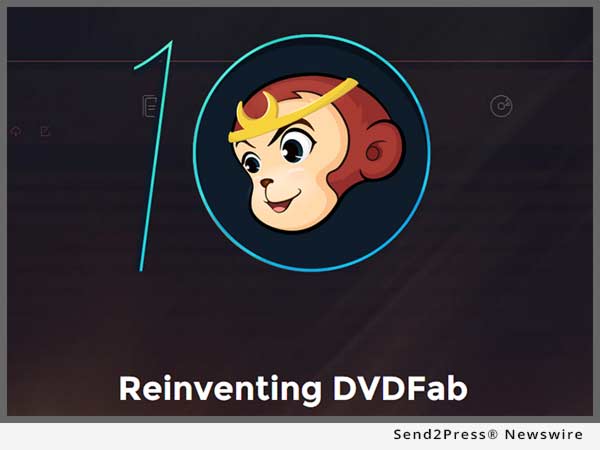 BEIJING, China, Nov 23, 2016 (SEND2PRESS NEWSWIRE) — On November 23, 2016, Fengtao Software, the industry leader in the field of DVD, Blu-ray and video backup solutions, introduces the 1st official release of its next generation DVDFab product line – the all-new DVDFab 10 – just in time for the upcoming Black Friday and Cyber Monday, and the company is offering 30 percent amazing discount on all its products. The special offer starts two days ahead of Black Friday and runs till the end of Cyber Monday. Read on for the detailed story.

DVDFab 9 has been in service for almost 4 years, now it’s time to move forward, to make a great product even greater. DVDFab 10 comes out with completely redesigned user interfaces based on unique software architecture, framework and operational logics that will surely present customers a fresh feeling and an improved user experience.

Besides, there are also the blazing fast cloud decryption service for DVDs, the all-new conversion engine in Ripper and Converter modules for 64-bit systems, the brand new task manager that makes task management easier, the archived task feature to save the tasks with user’s personal settings upon unexpected program crash or quit, and even the ability to change program UI skins, or to set the online movie poster of the loaded DVD/Blu-ray as UI background.

Most importantly, the DVDFab 10 is totally cost free to the existing paid customers with unexpired licenses. Don’t hesitate to make the upgrade.

The developers at Fengtao Software never stop brining innovations to its multimedia backup software. Accompanying the release of the next-gen DVDFab 10, the company surprises all of us by unveiling a somewhat shrank down version of DVDFab 10, but with a new name code as DVDFab Mini, and also a mobile application called DVDFab Remote for users to monitor the real-time task progress information of DVDFab 10 on their smart phones.

DVDFab Mini is not a standalone product branched out of DVDFab 10, but more interestingly, another way to use DVDFab 10 with the simplified interface layouts, or to be more specifically, with the most basic feature sets. It will be installed automatically in the process of DVDFab 10 installation, with its own independent desktop shortcut.

However, the fully-featured DVDFab 10 does not work side by side with DVDFab Mini. DVDFab Remote is designed for those who do not have time sitting in front of DVDFab but still want to have their tasks finished without a problem. It will receive timely push notifications on users’ smart screens, so that they can know what is exactly happening in DVDFab and decide whether or not it is necessary to take some necessary actions accordingly.

To the celebrate the introduction of DVDFab 10, DVDFab Mini and DVDFab Remote and in the meantime express its thankfulness and gratefulness to the long-term supports from all the users across the world, Fengtao Software is offering 30 percent amazing discount to anyone who purchases its products during the 2016 Black Friday and Cyber Monday period.

The coupon works not only on its DVD/Blu-ray/video backup products, but also its Passkey products, media player product line, PC backup software and iOS data recovery software series. Don’t miss out this exceptional opportunity. To make a purchase, feel free to visit http://www.dvdfab.cn/order.htm.

This press release was issued on behalf of the news source, who is solely responsible for its accuracy, by Send2Press Newswire. To view the original story, visit: https://www.send2press.com/wire/black-friday-special-introducing-the-all-new-dvdfab-10-with-30-percent-deep-discount/

HitPaw launches its largest sales events, offering up to 67% off and 1,000+ licenses absolutely free