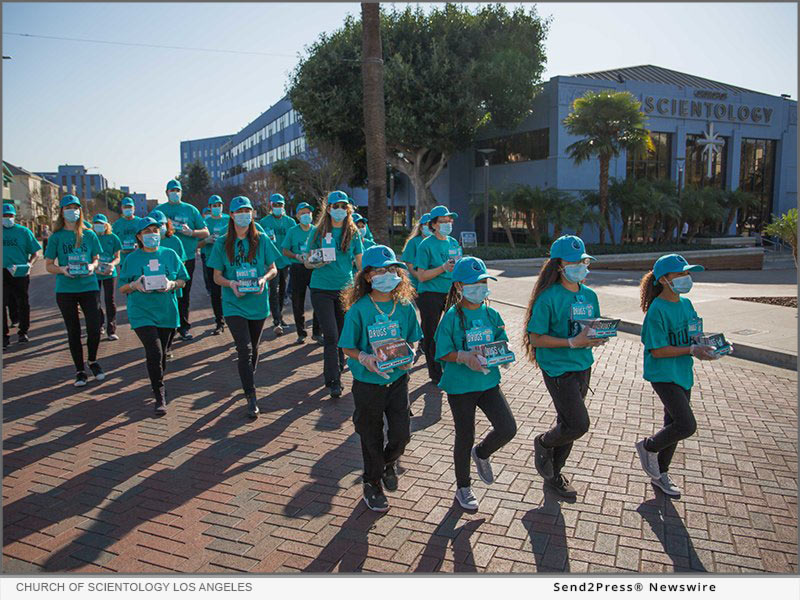 LOS ANGELES, Calif., Feb 03, 2022 (SEND2PRESS NEWSWIRE) — With overdose deaths spiking in Los Angeles County during the pandemic, Foundation for a Drug-Free World volunteers mobilize from the Church of Scientology Los Angeles to reach out with a drug education and prevention drive.

Drug abuse is not just a threat, it is a fact – another type of pandemic that affects the entire country and the world. And according to the L.A. County Department of Health, accidental drug overdose deaths rose 52 percent in the first 10 months of the pandemic over the same time period the year before, with the highest proportion associated with methamphetamine and fentanyl.

Foundation for Drug-Free World volunteers from across the city have launched an all-out campaign to get out their drug-free message to local residents and 150,000 visitors expected to arrive from out of town for the Super Bowl and its related activities.

Drug-Free World brings its education and prevention campaign to communities worldwide to reach people with the unvarnished truth about the most commonly abused drugs.

The Church of Scientology of Los Angeles, which sponsors a Drug-Free World chapter, is the coordination point for the launch.

Volunteers pack pick-up trucks with boxes of drug education booklets to distribute to stores, restaurants, hotels and community groups. They also hand out booklets to friends and neighbors.

International Drug-Free World coordinator Jessica Hochman says “Addiction in Los Angeles affects so many people, not just addicts but their families and friends. Drugs have somehow become ‘acceptable.’ But they ruin lives. We want to reach as many people as possible with our fact-based drug education.”

Foundation for a Drug-Free World is a nonprofit, international drug education program supported by the Church of Scientology and Scientologists. Scientology Founder L. Ron Hubbard noted the role substance abuse plays in the disintegration of the social fabric. He wrote, “Research has demonstrated that the single most destructive element present in our current culture is drugs.”

Foundation for a Drug-Free World was formed in 2006 to serve as the primary distributor of educational materials and to develop new materials to meet the challenge of continually changing drug trends.

The Church of Scientology Los Angeles is an Ideal Scientology Organization dedicated in April 2010 by Scientology ecclesiastical leader Mr. David Miscavige. The Church, featured in an episode of Inside Scientology, is configured to service Scientologists in their ascent to spiritual freedom and serve as a home for the entire community – a meeting ground of cooperative effort to uplift people of all denominations.

For more information, visit the websites of the Church of Scientology Los Angeles, Foundation for a Drug-Free World, or watch the Drug-Free World public service announcement and the Truth About Drugs: Real People-Real Stories documentary on the Scientology Network.

This press release was issued on behalf of the news source, who is solely responsible for its accuracy, by Send2Press Newswire. To view the original story, visit: https://www.send2press.com/wire/church-of-scientology-of-los-angeles-launches-a-massive-drug-prevention-campaign/