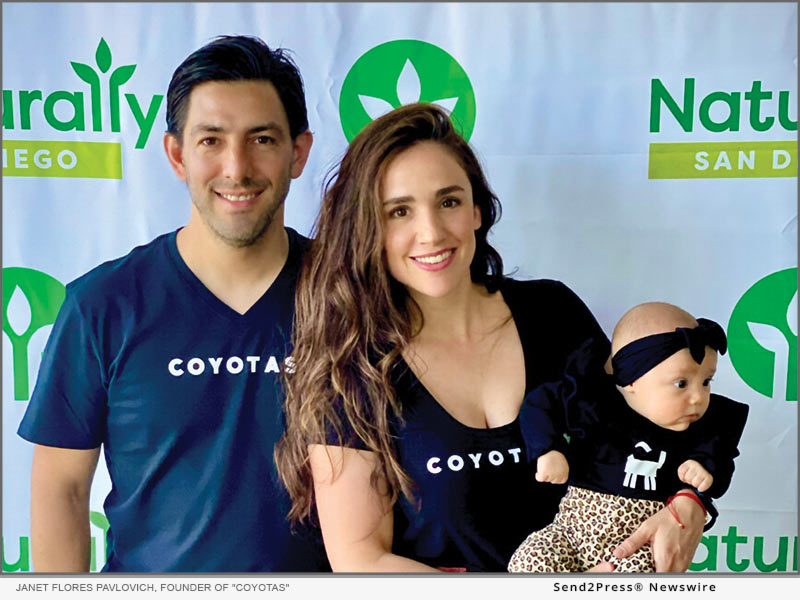 SAN DIEGO, Calif., Apr 12, 2022 (SEND2PRESS NEWSWIRE) — On April 7, at the “Naturally San Diego” 2nd Annual Pitch Slam, “COYOTAS” Cassava Tortillas, took the People’s Choice Award in this Shark Tank style event, showcasing Southern California’s emerging and promising natural products companies and their owners in front of a board of experts and a live audience. The sole purpose of this event is for the local community to support and drive growth in their industry.

Janet Flores Pavlovich, Founder of “COYOTAS” took the stage with the opening question “Who here eats Tacos?” to which the whole crowd replied excitedly about their love for Tacos.

“COYOTAS” Cassava Flour Tortillas are Gluten-Free, Grain-Free, Vegan and Paleo Tortillas made locally in San Diego, created for the purpose of dignifying the Tortilla and show how an authentic one should be already in the specialty food market.

Janet continued by saying: “We are the ONLY tortilla company in the market that offers a clean label 4 ingredients tortilla, authentic, with great flavor, great texture. The texture is so soft and pliable that your taco won’t fall apart; since it’s a deal breaker if it does.”

Janet went back to her hometown of Hermosillo, Sonora in Mexico to learn how to make tortillas from the source. Women called “Tortilleras” who have been making tortillas by hand for generations.

Inspired by living in California and its lifestyle, she decided to put a spin to the traditional tortilla recipe by making it gluten free and grain free by using cassava flour to, and by being made in a facility operated by her and cofounder/husband Alfredo Contreras, they can assure the quality of each tortilla being produced, and in her own words: “We have very high standards for Tortillas.”

The company Started in January 2020 in Farmers Markets, hand pressing every single tortilla, and were able to gather all the feedback firsthand and saw the love for the product.

But a couple of months later all shut down because of COVID and they had to create a solution when they decided to rely on ecommerce to be able to reach the customers they had at the moment.

At the same time, several specialty food markets started reaching out due to their own customers requesting that COYOTAS be in their retail stores.

Currently most of the business covers around 60 specialty food retail stores in Southern California mostly San Diego and Los Angeles area, focusing on growing organically, by saturating the area before expanding to new territories, being able to meet the customers’ needs and satisfaction before taking the next step, and keeping on the integrity and simplicity of our products, in the words of Janet: “We don’t want to be the small fishing boat catching a big whale and eventually sink.”

She added: “Want to build a company that we are truly proud of, connecting to our community, we want to use only clean ingredients in our products, and most of all have fun. What we do are Tortillas… but radically better and with Good Vibes.”

The pitch concluded with a series of questions from the board regarding the views and direction, growth and scalability for the company, in which she replied that COYOTAS is at 60% capacity already making plans for the next step in volume and efficiency without affecting quality that our customers know them for.

Another member of the panel mentioned she was hesitant of the Tortillas since most of the Gluten/Grain Free Vegan in the category are dry and fall apart, she was tremendously surprised at how delicious and fantastic they were, leading to the question, How is COYOTAS communicating to consumers that they will not be sacrificing their love for tortillas by consuming these? To what Janet replied: “We have been very lucky that our own loyal customers have been our voice to new customers, especially since in proximity they too look for similar products. Also, we currently offer 1 Free Pack of Tortillas on our website for them to be able to try before committing to a full purchase, since we trust our product and brand so much and by doing constantly demos at the retail stores where you can find COYOTAS.”

This press release was issued on behalf of the news source, who is solely responsible for its accuracy, by Send2Press Newswire. To view the original story, visit: https://www.send2press.com/wire/coyotas-tortillas-is-naturally-san-diegos-pitch-slam-peoples-choice/