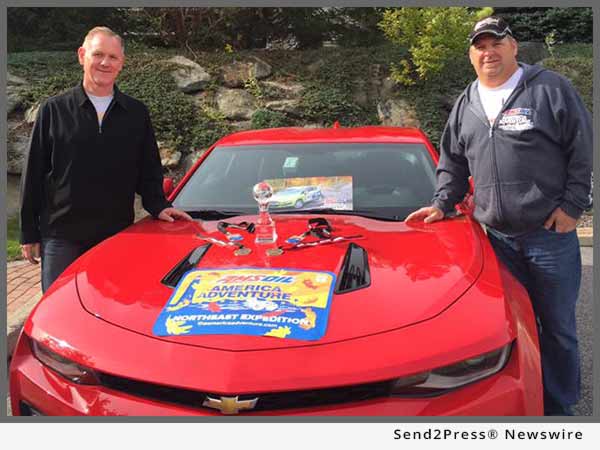 Led by driver John Fox of Williamson, N.Y. and Navigator Alan Hester of Lumberton, N.J. the team raced a 2016 Chevrolet Camaro SS in the grueling 5 day event starting Oct. 4 from the light house in Portland, Maine. A total of 20 teams competed against each other to earn points for solving clues, riddles, puzzles and conquering track challenges on 4 different race tracks while traveling as far west as Lake Placid, N.Y. and then looping back through the historic and beautiful terrain of New England.

The teams included a polyglot of folks from all across the country including husbands and wives, race track presidents and officials, professional track drivers, singers, songwriters, former America Adventure champs, an interior designer, a building contractor, an IT manager, a real estate developer, a not-for-profit developer, and an adventurous retired couple.

John Fox of Williamson, N.Y. is the Founder and President of East Coast Hot Rod, an organization that is passionate about bringing people and their special interests in hot rods together. The term hot rod encompasses just about anything with wheels, including rat rods, street rods, show rods, classic customs, concept cars, trucks and bikes. East Coast Hot Rod hosts “Cars and Coffee” at the Rochester Auto Museum and car shows in Monroe, Ontario and Wayne County.

This press release was issued on behalf of the news source, who is solely responsible for its accuracy, by Send2Press Newswire. To view the original story, visit: https://www.send2press.com/wire/east-coast-hot-rod-announces-a-first-place-overall-win-in-the-2016-amsoil-america-adventure-road-rally/