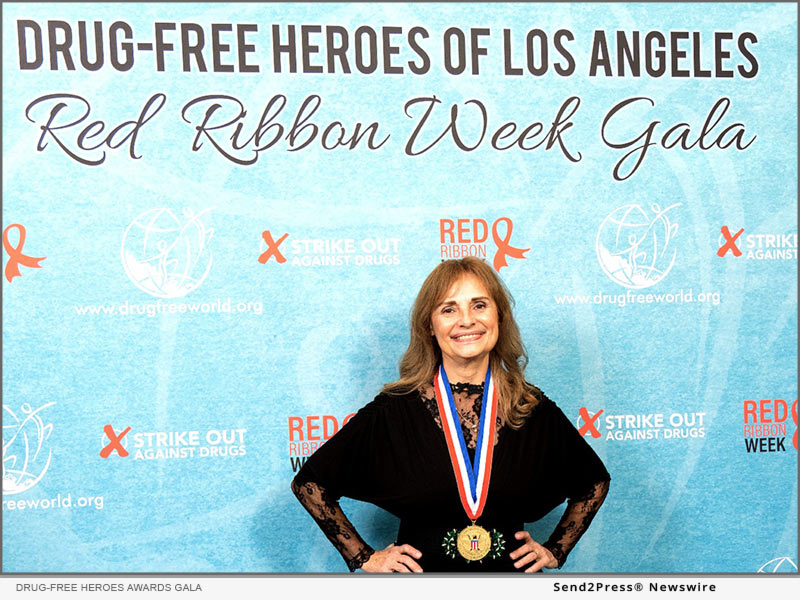 LOS ANGELES, Calif., Nov 09, 2022 (SEND2PRESS NEWSWIRE) — Church of Scientology Los Angeles hosts the second annual National Red Ribbon Week Drug-Free Heroes Awards to help end the deadly crisis that is threatening the lives of L.A. kids. Los Angeles was rocked in September by the death of a 15-year-old student who died in school after taking a single pill laced with fentanyl. She was the seventh L.A. teenager to overdose on fentanyl in the previous 30 days.

Event keynote speaker and awardee Mr. Henry Lozano is an example of what one man or woman can do to reverse this catastrophe. For decades, countless children’s lives have been saved because of his work.

Lozano is the founder of National Red Ribbon week, the nation’s oldest and largest drug prevention awareness program. He also served as director of USA Freedom Corps under President George W. Bush, has held the position of director of Los Angeles County Teen Challenge and Urban Ministries Initiative since 2011, and is active in Californians for Drug-Free Youth and Points of Light Foundation.

National Red Ribbon Week honors the life and sacrifice of Enrique (Kiki) S. Camarena, a Drug Enforcement Administration (DEA) agent working undercover in the 1980s to close the pipeline of deadly drugs into the U.S. from Mexico. His operation was compromised and in February 1985, Camarena was kidnapped. A month later, his body was found.

Lozano, a high school friend of Camarena, launched Camarena Clubs in their hometown of Calexico, California, in coordination with Congressman Duncan Hunter. Hundreds of club members wore red ribbons and pledged to lead drug-free lives to honor the sacrifices made by Camarena and others. In 1988, the campaign gained national prominence when President and Mrs. Ronald Reagan agreed to serve as honorary chairpersons.

Each year, during the last week in October, more than 80 million young people and adults show their commitment to healthy, drug-free living while wearing or displaying the Red Ribbon.

Betsy Davis, who coordinates the Drug-Free World Foundation’s Los Angeles chapter, showed those attending how simple it is for anyone to take effective action to combat this deadly crisis.

The Foundation’s Truth About Drug materials communicate the cold, hard truth about what drugs are and what they do in youth-friendly booklets and videos. The Truth About Drugs educator’s manual enables anyone to provide fact-based drug education.

Cohosting the event was David Sanchez, founder of the L.A. nonprofit Strike Out Against Drugs. Since 2014, his organization has visited more than a hundred communities throughout Los Angeles and Southern California spreading the truth about drugs, reaching some 1.5 million people with an anti-drug message and changing the lives of countless kids. A documentary on his work and accomplishments is featured as an episode of Voices for Humanity on the Scientology Network.

Twelve new Drug-Free Heroes were awarded for their dedication and work to creating a Drug-Free Los Angeles and beyond. These included Beacon of Hope Sober Living cofounder Nick Salvato; Grace Sierra, Los Angeles-based Vice Consul of Honduras; and Alejandro Jose Letona Alvarado, Consul General of El Salvador and his staff.

Mr. Lozano presented Anna Grace Zaucha with the prestigious Gold Medal Presidential Volunteer Award including a medallion, certificate of achievement and a letter signed by President Biden in honor of her outstanding volunteer work to help youth remain drug-free.

The Church of Scientology and Scientologists support Foundation for a Drug-Free World, making it possible to provide the materials free of charge to teachers, community groups, churches, and anyone wishing to educate others on the facts behind drugs and addiction.

After extensive research on the effects of drugs, Scientology Founder L. Ron Hubbard wrote, “Research has demonstrated that the single most destructive element present in our current culture is drugs.”

The Church of Scientology Los Angeles is designed to provide ideal facilities for Scientologists on their ascent to higher states of spiritual freedom and to serve as a home for the entire community — a meeting ground of cooperative effort to uplift people of all denominations. The Church was dedicated by Scientology ecclesiastical leader Mr. David Miscavige in 2010.

For more information, visit the website of the Church of Scientology Los Angeles or the new interactive timeline at Scientology.org/our-help-is-yours/.

This press release was issued on behalf of the news source, who is solely responsible for its accuracy, by Send2Press Newswire. To view the original story, visit: https://www.send2press.com/wire/join-the-drug-free-heroes-and-help-protect-youth-from-drug-overdose/

Scientologists Say Knowing the Truth About Fentanyl Can Save Lives