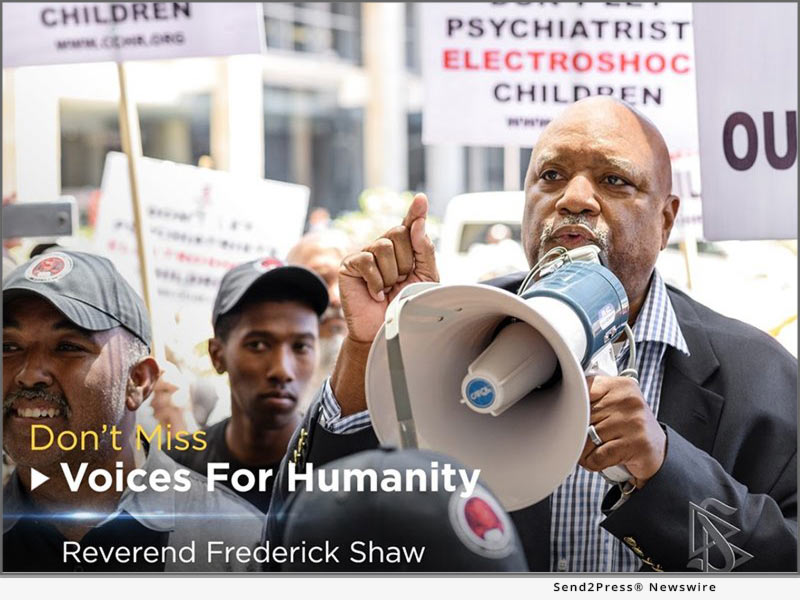 LOS ANGELES, Calif., Feb 03, 2022 (SEND2PRESS NEWSWIRE) — An episode of “Voices for Humanity” on the Scientology Network documents the work of Rev. Fred Shaw, international spokesperson for Citizens Commission on Human Rights (CCHR) and vice president of the Inglewood/South Bay chapter of NAACP.

“David can beat Goliath,” says Rev. Shaw. “As long as I can breathe, as long as I can stand, I want to help my fellow man by arming them with the truth.”

One of Shaw’s heroes growing up was Martin Luther King Jr. He not only inspired Shaw to become a minister but also to dedicate his life to service to the community.

In the belief that many problems between the African American community and law enforcement could be resolved if there were more Black officers, he became an L.A. County Sheriff’s deputy, where he worked with the Sherriff’s Athletic League and in community relations.

But it was his work in crime prevention that opened his eyes to root causes of the problems in his community – what he describes as “systemic abuse and institutional racism that pervades the psychiatric-behavioral industry.”

Shaw, who recently founded the CCHR Task Force Against Institutional Racism in the Psychiatric Industry, is dedicated to exposing and combating the abuse of people of color and minorities in the field of mental health.

“My passion is to elevate people, especially in the African-American community, and to help them know the traps that are out there,” says Shaw. “There’s an old saying that if you saw a trap coming, it wouldn’t be a trap.”

Citizens Commission on Human Rights is a nonprofit charitable mental health watchdog established by the Church of Scientology in 1969, dedicated to eradicating psychiatric abuses and ensuring patient protections.

Scientology Network has been viewed in 240 countries and territories worldwide in 17 languages. Broadcast from Scientology Media Productions, the Church’s global media center in Los Angeles, the Scientology Network is available on DIRECTV Channel 320 and can be streamed on Scientology.tv, mobile apps and via the Roku, Amazon Fire and Apple TV platforms.

This press release was issued on behalf of the news source, who is solely responsible for its accuracy, by Send2Press Newswire. To view the original story, visit: https://www.send2press.com/wire/scientology-network-reveals-psychiatrys-abuse-of-the-african-american-community/

Church of Scientology Helps Nonprofit Strike Out Against Drugs