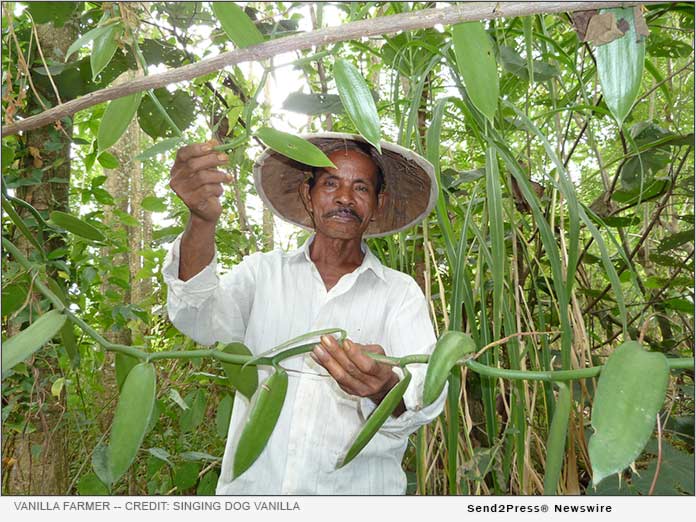 “While farmers reaped the benefit of spectacularly high prices for their vanilla crop, theft and violence became a problem causing farmers to hire security guards and sleep in their fields to prevent their green vanilla beans from being stolen in the night,” says Bill Wiedmann, Co-founder of Singing Dog Vanilla.

The good news is that high vanilla prices also encouraged vanilla farmers to plant more vines and enticed new growers to enter the vanilla market. With a lag time of about 3 -4 years before newly planted vanilla orchid vines produce a good harvest, we now have an increased supply coming to market. This has resulted in a decline in prices from the stratospheric highs which caused problems for everyone in the supply chain. Vanilla is now trading at a price level that is attractive to farmers because it is a profitable crop for them to grow but does not attract theft.

“Our family farmers in Indonesia are relieved to see the prices coming down to sustainable levels,” adds Wiedmann. “We expect that over the next several months farm-gate prices in Indonesia for cured vanilla beans will come down to approximately Rp 1.5 – 2 million (US$110 to US$150) per kilogram. This is a price that everyone in the supply chain can benefit from.”

Lower market prices for vanilla beans and vanilla extracts mean that home users can be more generous with vanilla in their kitchens. Bakeries and Ice Cream Shops can bring back their favorite vanilla recipes and develop new ones without focusing on the cost of that one critical ingredient.

Founded on April Fool’s Day in 2004, Singing Dog Vanilla has offices in Eugene, Oregon and Phoenixville, Pennsylvania. They partner with over 400 vanilla-growing families in Indonesia to bring organic vanilla products to food manufacturers, bakeries, scoop shops, restaurants, and breweries. Singing Dog Vanilla also has a full line of retail products sold in natural grocery stores across the USA and internationally. Profits are shared with their vanilla farmers and employees.

This press release was issued on behalf of the news source, who is solely responsible for its accuracy, by Send2Press Newswire. To view the original story, visit: https://www.send2press.com/wire/vanilla-prices-coming-back-down-to-earth-after-years-of-record-highs/