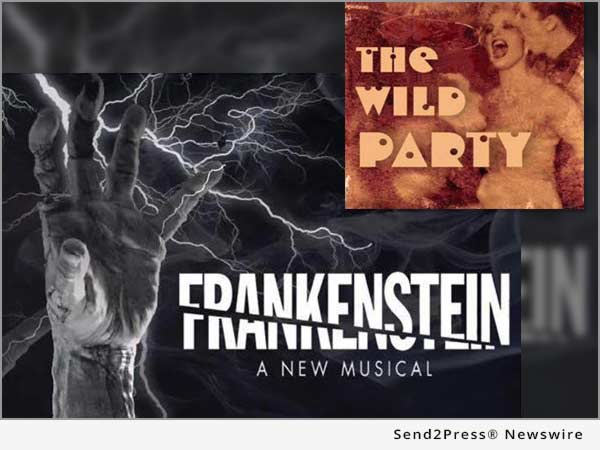 HOLLYWOOD, Calif., Aug 24, 2016 (SEND2PRESS NEWSWIRE) — Art-In-Relation, Jonas Sills, producer, announces a move from Long Beach, after two successful seasons, to Hollywood with two hauntingly gorgeous, but lesser known musical theater productions at The Complex Theatres, Hollywood. A combination of “The Wild Party.” a lesser known version of the musical based on the poem by Joseph Moncure, and written by Andrew Lippa, coupled with Mary Shelley’s tale with a musical twist, “Frankenstein, A New Musical,” with music by Mark Baron, lyrics by Jeffrey Jackson, and a book by Jackson and Gary P. Cohen, a Los Angeles premiere.

Having an extreme interest in “Breathing new life” into musical theater, Art-In-Relation is excited about moving forward with a unique mission to offer and produce lesser known works of musical theater to an diverse Los Angeles audience.

The creative team for the two productions includes two teams led by two directors who have been with Art-In-Relation before. Quentin Garzon, Director, “Wild Party,” is passionate about the 1920’s era musical with lush score, harmonies, and innovative dance. Passionate enough in fact that he convinced Art-In-Relation to produce the show.

Having produced “Frankenstein” as their inaugural production, Art-In-Relation co-producer Ray Buffer was intrigued with the possibility of bringing the production to Los Angeles Audiences.

“Re-envisioning Frankenstein in a smaller, more intimate space allows us to create nuances in the performance that were not possible in a large space. This production will aim for visceral relationship between audience and storytellers, where the audience feels they are part of the mindscape,” Buffer stated.

“I am grateful for this opportunity to work with a dynamic group of talented cast and crew on this new venture producing this under recognized work,” Buffer added.

Sills is most passionate about intimate theater, and having the location and audience to foster it, a move to the heart of “theater row” was the “natural evolution.”

“I am looking forward to continuing the success of these two winning shows with more under-noticed works in the future,” noted Sills.

“Frankenstein, A New Musical” plays October 7 – October 30, 2016 in “The Flight” theater also at The Complex. Shows play Thursday, Friday and Saturdays at 8 p.m., Saturday and Sunday at 2 p.m.

For information and tickets please go to http://www.artinrelation.com/.

Art-In-Relation (A.I.R.) is an innovative production company focusing on breathing new life to more unknown works of musical theater as well as some new interpretations of more well-known shows. A.I.R. has worked in several venues in Los Angeles including the Ernest Borgnine Theater, the Founder’s Center, and more recently The Complex Theatres. A.I.R. also in its mission is dedicated to bringing works of art to underprivileged audiences throughout southern California.

A photo gallery can be found on the A.I.R. Facebook page: https://www.facebook.com/artinrelation/photos_stream.

This press release was issued on behalf of the news source, who is solely responsible for its accuracy, by Send2Press Newswire. To view the original story, visit: https://www.send2press.com/wire/art-in-relation-pairs-two-unknown-works-of-musical-theater-art-wild-party-and-frankenstein-a-new-musical-in-hollywood/

Gary Fritzen, Composer, and California Arts Org, Art-In-Relation Team for ‘There Will Be Light’ – You Sing It, New Song Challenge