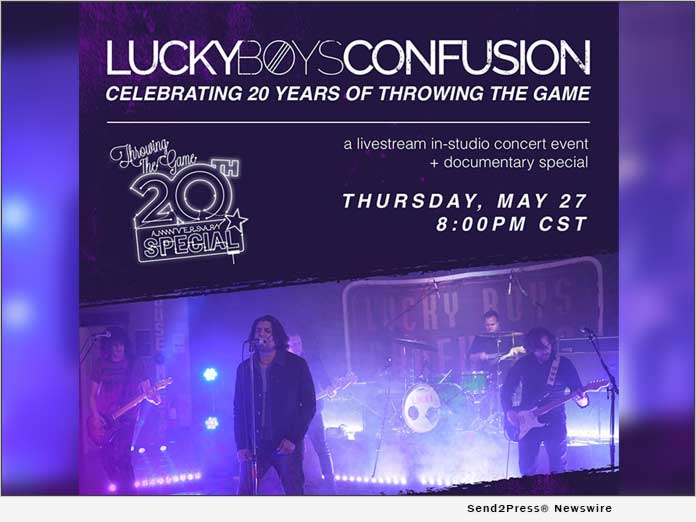 CHICAGO, Ill., May 18, 2021 (SEND2PRESS NEWSWIRE) — It’s been twenty years since Lucky Boys Confusion arrived on the global scene with their 2001 debut, “Throwing the Game.” During the TTG era, the hard-touring Chicago five-piece crisscrossed the U.S. innumerable times over, made their national television debut on the CBS Late Late Show, and even made a pit stop in Japan to play for their enthusiastic overseas fan base.

The ensuing two decades have been a story of artistic growth (see 2003’s follow-up, “Commitment”) and perseverance through tragedy (the unexpected loss of founding member Joe Sell in 2012) as the band has continued to perform and create, culminating with their 2017 comeback record, “Stormchasers.”

Now, with the “Throwing the Game 20th Anniversary Special” the boys are back, and ready to celebrate their legacy. This special global streaming event – an “in-studio concert & documentary special” – is a combination of recently recorded live footage (including TTG classics such as “40/80′” and “Fred Astaire”), new interviews with the band members, and unearthed archival footage from the recording of the album, as well as the ensuing 2001-2002 tours. Oh, and maybe a few surprise guests will drop by to say hello!

The “Throwing the Game 20th Anniversary Special” streams worldwide on Thursday, May 27 at 8 p.m. Central Time on the Moment House streaming platform (https://www.momenthouse.com/co/luckyboysconfusion-throwing-the-game-20-year-anniversary), where the band will be doing a live, virtual “VIP after party” with fans immediately following the airing. Virtual tickets are available now, which will provide users a link to the event.

This press release was issued on behalf of the news source, who is solely responsible for its accuracy, by Send2Press Newswire. To view the original story, visit: https://www.send2press.com/wire/chicago-rock-band-lucky-boys-confusion-celebrates-20th-album-anniversary-with-global-streaming-event-memorial-day-weekend/

Tenorshare Celebrates its 8th Anniversary with Big Discounts: Up to 40% Off