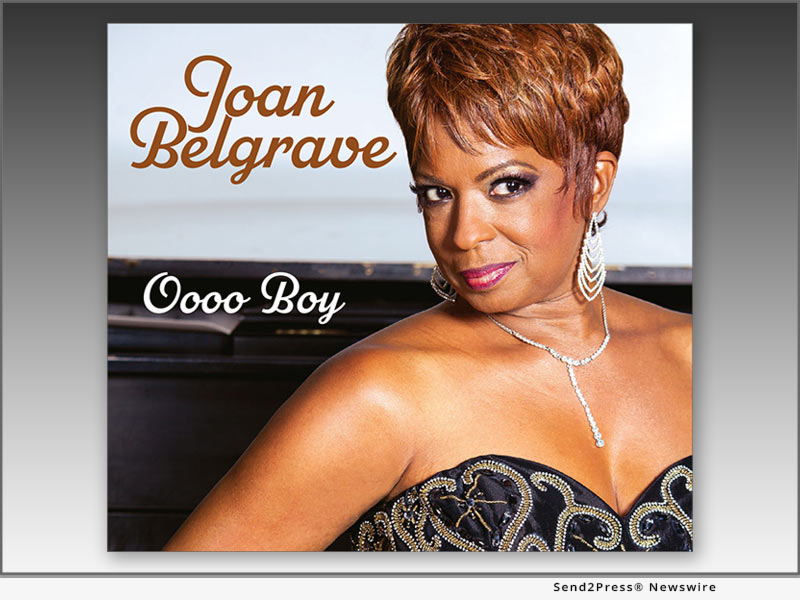 DETROIT, Mich., Oct 24, 2022 (SEND2PRESS NEWSWIRE) — Dynamic singer and songwriter Joan Belgrave latest EP release, “Oooo Boy,” gives expression to three distinct declarations of love. With her lush voice drawing liberally from gospel, soul, and pop traditions, Joan gives her all on these tunes, which are produced by Sanchez Harley (Shirley Caesar, Mighty Clouds of Joy, RiZen and others). On the current EP, available from the Jazz Development Workshop Inc., Joan Belgrave shimmers through both playful and passionate moods on the original R&B/pop compositions “Oooo Boy,” “Dreaming of You,” and “I’m Not Going Anywhere.”

Belgrave is a veteran vocal powerhouse who has previously released albums as a soloist, some in partnership with her late husband, jazz trumpet stalwart Marcus Belgrave, who passed away in 2015. The EP was conceived in the wake of this loss and recorded as Joan continues a challenging personal battle with triple negative breast cancer (TNBC), the EP is a labor of love and a testament to the artist’s endurance. With both this new EP recording completed, and a brand-new documentary film about Marcus in the works, Joan is forging ahead with optimism and a singleness of purpose. She hopes her story of perseverance in the face of overwhelming odds serves as a gift to inspire and encourage others facing major challenges in their lives.

Songs Of Love, Music That Heals

The EP’s title tune, “Oooo Boy,” available for download on Apple Music, is a sexy blues come-on – a party-ready invitation to a potential partner. The video for this danceable flirtation was filmed at the Italianate-style Berry Gordy Mansion in Detroit and features Mark Scott, the current lead singer of The Miracles. “Dreaming of You” is a smooth expression of sweet longing in the mold of mid-tempo favorites from a classic era of R&B. “I wanted to write a song that is light and airy, but nice and dreamy. I wanted to write something that was musically timeless, with a ‘Pillow Talk’ feel to it,” says Joan, giving a nod to the 1973 hit by Sylvia.

The third track, “I’m Not Going Anywhere,” is a tender promise of unconditional love that will resonate with anyone who has experienced that most exalted of emotions. Rarely has such a simple declaration sounded so profound. Joan says that the catalyst for creating the tune was the loss of her husband, adding that the song practically wrote itself after an extended period of mourning.

After his passing, Joan was faced with rebuilding not only her personal but her professional life as well. Joan felt it best to leave Detroit memories behind, temporarily moving to New York City’s Harlem to spend time with her daughter and newborn twins. Still, the pain of her loss seemed almost insurmountable. But one night, the song appeared and instantly brought a measure of peace.

“It was almost like Marcus was helping me write it,” Joan recalls. “The lyrics just came and started flowing. It almost felt like he was saying, ‘Okay, that’s enough. I understand, but you need to get back to doing what you do. And I’m still here. I’m not going anywhere.'” With its relatable lyrics, gorgeous melody, and a riveting performance by Joan, “I’m Not Going Anywhere” is poised to become an anthem heard at weddings, engagements, and homegoing services.

Inspired by the work of her late husband, Joan has also made it her mission to see Marcus Belgrave’s story celebrated on the big screen. Joan is currently producing and appearing in a film documentary that spotlights his many contributions to the popular music landscape in a career that spanned some 50 years. Titled “Marcus Belgrave: All My Love,” a nod to the tune “All My Love” that the Chester, Pennsylvania-born musician wrote in honor of his adopted hometown Detroit, the documentary features interviews with some 30 fellow musicians; a key scene will be a concert by Joan of some of Marcus’s favorite tunes with other special guests before a live audience at Detroit’s historic 400-seat Gem Theatre. The film is expected to be complete in the spring of 2023. “I want to get his story told on my watch,” Joan declares. “I don’t want somebody else telling his story.”

A jazz and soul trumpet player who toured and recorded with Ray Charles in the 1950s before returning to the Motor City in 1963 to work with Martha Reeves and the Vandellas, the Temptations, and the Four Tops, continuing to tour and record. Marcus founded the Jazz Development Workshop, a school program that helped develop careers for generations of jazz artists. At Motown and the Workshop, he became a mentor to such talents as Ray Parker Jr., Stevie Wonder, and Marvin Gaye at Motown, as well as jazz artists Geri Allen, Kenny Garrett, Regina Carter, and others. In addition to recording as a leader, Marcus’s trumpet can be heard on recordings by Tony Bennett, Ella Fitzgerald, Sammy Davis Jr., Geri Allen, David “Fathead” Newman, B.B. King, and Wynton Marsalis. Named as Detroit’s only Jazz Master Laureate, Marcus Belgrave was also inducted into the National Rhythm & Blues Hall of Fame in Detroit in 2017 and has a city street, Marcus Belgrave Avenue, dedicated to him.

Facing Down Cancer with Faith and Purpose

Continuing to work while undergoing intensive treatment for an aggressive form of cancer has not been easy for Joan. Intensely spiritual as well as massively talented, she says she has been blessed to continue to make music, which has its own healing properties. And after maintaining silence around her diagnosis, Joan now feels it is important to speak out to support and encourage others.

“If I can help someone else to let them know it’s okay, then it’s okay,” says Joan. “Just keep pushing. A tunnel is just that, a tunnel. You just keep walking through. Just keep putting one foot in front of the other and before you know it, the light is shining.”

“Oooo Boy” is available now on all digital platforms.

Keep up with JOAN BELGRAVE by visiting:

Learn more about the Jazz Development Workshop at: https://www.facebook.com/people/Jazz-Development-Workshop-Inc/100068048431179/

This press release was issued on behalf of the news source, who is solely responsible for its accuracy, by Send2Press Newswire. To view the original story, visit: https://www.send2press.com/wire/detroit-singer-songwriter-joan-belgraves-oooo-boy-ep-features-range-of-romantic-moods-and-timeless-grooves/