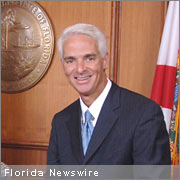 “The people of Florida represent a rich legacy of diverse cultures, backgrounds and experiences, and we want to be represented accordingly,” said Governor Crist. “Florida families should participate in the 2010 Census to ensure our state receives the funding necessary to meet the needs of our citizens.”

During his remarks, Governor Crist emphasized the importance of Florida being represented accurately in the 2010 Census. He noted that the Census determines plans for everything from schools and roads, to senior centers and other government services.

Timeline for the 2010 Sunshine Census

In February 2009, Governor Crist signed Executive Order 09-41, creating the 2010 Sunshine Census Statewide Complete Count Committee, and appointed 45 Floridians to serve on the committee until December 31, 2010. The Statewide Complete Count Committee mirrors Florida’s diverse population to ensure an accurate count of the people who reside in Florida in 2010 and represents a wide array of community-based and faith-based organizations, local governments, state agencies, media groups and businesses.

During February and March 2010, census questionnaires will be mailed or delivered to every household throughout Florida and are due to be returned by mail by Census Day, which is April 1, 2010. These short forms take only minutes to fill out, and will have an impact on Florida’s future for the next 10 years. Between April and July 2010, census takers will visit households that did not return a questionnaire by mail.

In December 2010, the Census Bureau will deliver population counts to the President of the United States for apportionment, the process of proportionately dividing the 435 seats in the U.S. House of Representatives among the 50 states.

Conducted every 10 years as required by the U.S. Constitution, the 2010 Census is a count of everyone living in the United States. Census data is used to determine Congressional seats to states, to choose available community services, and to allocate more than $400 billion in federal funds to local, state and tribal governments annually. The 2010 Census consists of 10 questions, taking about 10 minutes to complete and will be one of the shortest questionnaires to date. Confidentiality of respondents and the information they provide is protected by strict confidentiality laws.