TALLAHASSEE, Fla. /Florida Newswire/ -– Governor Charlie Crist today announced the appointment of Circuit Court Judge Jonathan Gerber of Hollywood and Spencer Levine of Fort Lauderdale to the Fourth District Court of Appeal. “Judge Gerber’s civil and criminal court experience have prepared him well to serve on the appellate court,” Governor Crist said. “His commitment to public service, along with his strong work ethic, will serve the people of the Fourth District well.” 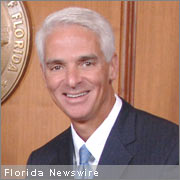 Judge Gerber, 40, has served on the 15th Judicial Circuit since 2004. Previously, he served on the Palm Beach County Court from 2002 to 2004. He practiced with Shutts and Bowen, and with Cadwalader, Wickersham and Taft. He earned a bachelor’s degree from Princeton University and graduated from the University of Florida College of Law.

“Spencer brings to the bench a unique perspective from his diverse experience, including investigating Medicaid fraud, reviewing legal matters for a local law enforcement agency, and practicing as both a private attorney and a prosecutor,” Governor Crist said. “His broad knowledge of civil, regulatory, administrative and criminal law will be especially important to the court.”

Levine, 48, is the senior vice president and chief operating officer of Broward Health, where he previously held the position of senior vice president and chief compliance and ethics officer and chief administrative officer. From 2002 to 2006, he served in the Office of the Attorney General in the Florida Medicaid Fraud Unit, rising from senior chief assistant attorney general to director of the unit in 2003. Previously, he practiced with Adorno and Zeder, in the Office of the Guardian ad Litem, as general counsel with the Palm Beach County Sheriff’s Office, as assistant state attorney with the 15th Judicial Circuit, with Enten, Schwartz et al and as a sole practitioner. He earned a bachelor’s degree from New York University College of Arts and Sciences and graduated from the University of Miami School of Law.

Gerber and Levine will fill the vacancies created by the retirement of Judge Larry Klein and the elevation of Justice Jorge Labarga to the Florida Supreme Court.