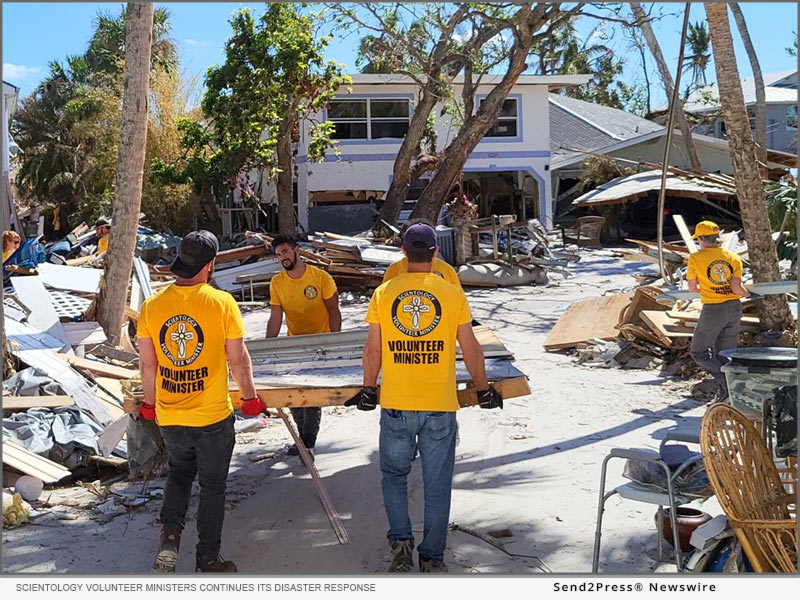 FORT MYERS BEACH, Fla., Nov 08, 2022 (SEND2PRESS NEWSWIRE) — Scientology Volunteer Ministers continue their disaster response in the aftermath of Hurricane Ian where recovery is far from over for many affected by the storm. The devastation they encounter is still so overwhelming that one of the volunteers describes how they have to go about helping those in areas hardest hit by the storm.

The Scientology Volunteer Minister pulled a photo binder and a framed photo out of the rubble of a home. “We’re doing our best to find the owners,” she said. “Sometimes the neighbors know, sometimes they don’t. This was from somebody’s home, this was inside somebody’s house. It can be kind of emotional sometimes. Some of them are halfway okay. I don’t know how they really survived,” she says, cleaning off a framed photo that, apart from being completely covered in dried mud, looks otherwise unharmed.

Another team of Volunteer Ministers is distributing food, water and hygiene supplies to local households, helping families survive the economic challenges made worse by the hurricane. As one Fort Myers Beach resident put it, “It is hard enough at this time to have a baby. I can’t really afford to pay for all the things I need. Your supplies will make such a difference.”

A local couple was wary at first. There’s been looting and other problems. However, the Volunteer Ministers seemed different they said, “And we felt like we could trust them. They had the brightest smiles. We’ve been waking up every morning to this devastation and these guys are just the bright part of our day. People keep coming to me and saying where did you find these guys?”

Another resident told them, “Now that you’re here, I’m not overwhelmed anymore. I’m going to be able to survive this and put everything in my life back together. People helping people is the silver lining of the whole disaster.”

Whether serving in their communities or on the other side of the world, the motto of the Scientology Volunteer Minister is “Something can be done about it.” The program, created by Scientology Founder L. Ron Hubbard in the mid-1970s, is sponsored by the Church of Scientology International as a religious social service and constitutes one of the world’s most significant independent relief forces.

The Volunteer Minister “helps his fellow man on a volunteer basis by restoring purpose, truth and spiritual values to the lives of others.”

Tampa Bay Volunteer Ministers earned their reputation as “Hurricane Heroes” with an award from the Governor of Florida after their response to Hurricane Charlie in 2004: “This certificate is presented to Scientology Volunteer Ministers of Tampa Bay Hurricane Heroes, in recognition of exemplary efforts that not only benefit your local community but also lend truth to the belief that all citizens of Florida can make a difference in the lives of those they serve.”

They have continued to serve, responding to Hurricanes Rita and Katrina in 2005 and every local hurricane since, most recently Irma in 2017, Michael and Florence in 2018, as well as Hurricane Harvey in Texas in 2017, Maria in Puerto Rico in 2018, and Dorian in the Bahamas in 2019.

In June 2016, Scientology ecclesiastical leader Mr. David Miscavige dedicated the center for the Scientology Volunteer Ministers of Florida, along with a Scientology information center and six other humanitarian centers in downtown Clearwater. He said, “In times of disaster, whether affecting whole populations or a single household, our Volunteer Ministers prove on a daily basis that ‘something can be done about it.’ We do not discriminate. We do not judge. All we care to do is help. And, as demonstrated time and again, we deliver that help anywhere and everywhere.”

For more information on the technology used by the Volunteer Minister in confronting and handling disasters, watch Scientology Tools for Life on the Scientology Network at DIRECTV 320 or at www.Scientology.tv.

This press release was issued on behalf of the news source, who is solely responsible for its accuracy, by Send2Press Newswire. To view the original story, visit: https://www.send2press.com/wire/hurricane-ian-is-still-a-disaster-for-many-florida-families/

Scientology Volunteer Ministers Reach Out Once Again with Help