TAMPA, Fla. /Florida Newswire/ — Tom Krueger, owner of Brayfield’s Farm, recently provided the Lowry Park Zoo in Tampa with a rare French Poitou Donkey named Geraldine. The livestock conservancy lists the Poitou Donkey as critically endangered. In fact, in 1980, it was estimated that there was fewer than 80 of these delightful animals in the world. 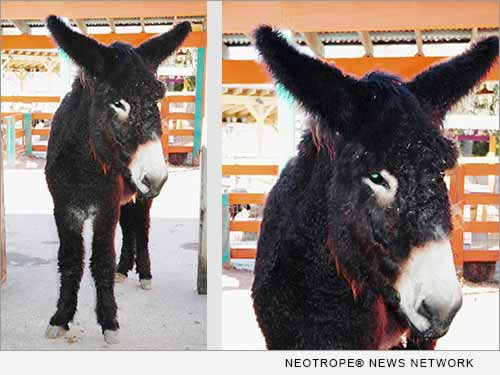 However, conservation efforts have gotten results. The breed has increased in numbers and in 2012, approximately 2,500 pure Poitous were registered in the studbook.

Poitou Donkeys are either black or brown with white bellies. They have large, long ears and long hair. In some northern climates, their long hair will form dreadlocks. They are docile and social.

“We were very happy to provide Geraldine to the Lowry Park Zoo so more people can see what wonderful animals they are,” Krueger says.

Six-year old Geraldine will make the Lowry Park Zoo her new home and was recently joined by her stable mate, Jelly Bean, a standard donkey.

After several weeks at the zoo, Melinda Mendolusky, Lowry Park Zoo animal care manager, commented, “What a joy they are to be around and they have now joined ‘The Parade of Animals’ which happens every day at 11:30 a.m. and 2:30 p.m.”

Founded in 2009, Tampa’s Lowry Park Zoo is a 63-acre nonprofit zoo that is recognized by the State of Florida as the center for Florida wildlife conservation and biodiversity.