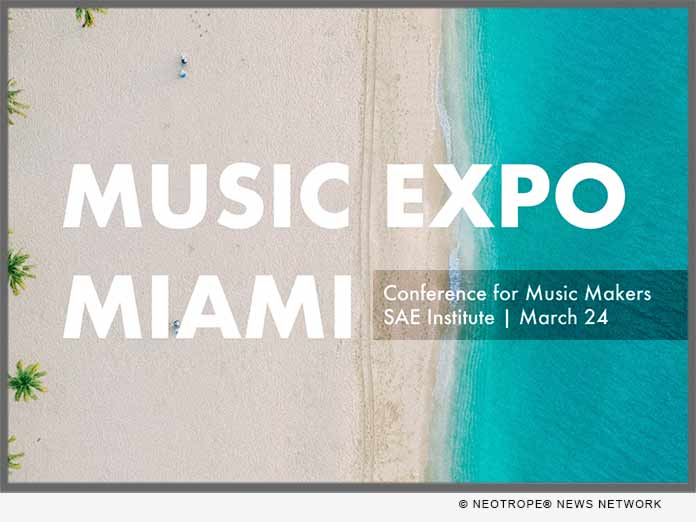 Early bird tickets are available until January 31 at https://musicexpo.co/tickets

“We are truly pleased to welcome back Music Expo for a second time to the Miami music community,” says Frank Socorro, Career Services Representative at SAE Institute Miami. “This year, there will be in-studio sessions led by some of the speakers that will surely draw any aspiring producers to attend.”

In addition to Miami, Music Expo will celebrate its fifth year anniversary at SAE Expression College in San Francisco, November 10, and will come back to Boston in June.

In 2018, Music Expo will continue to grow with an additional event in Nashville and the launch of Music Expo Masterclasses, a series of in-studio music production workshops with award-winning producers.

“Our collaboration with Music Expo will continue this year. We are not surprised to see the community growing across the U.S.,” says Nick Humbert, International Business Development Manager for Sound On Sound. “Music Expo is becoming the event for end-users to connect in real life with both professionals and manufacturers.”

If you are an Exhibitor or Sponsor and see an opportunity to showcase your musical brand or product, Music Expo wants to hear from you. Contact us now at info@offtheone.com or +1 213-973-3534.

“We are a platform to facilitate dialog between music makers through events, social, competition and now in-studio masterclasses to anyone – from professional to aspiring – interested in the art of making music. While we grow, we are making our best efforts to keep the easygoing vibe that our attendees love,” says Loïc Maestracci, Founder and Executive producer of Music Expo.

About Music Expo:
Held in San Francisco, Miami, Boston and coming this year to Nashville, Music Expo is a series of annual events full of educational sessions, studio sessions, discussion and product demos bringing musicians, engineers, technophiles and tastemakers together. Its mission is to inspire to make music.