PENSACOLA, Fla. /Florida Newswire/ — Ron Maseth, award-winning professional bodybuilder, announces a new pre-show training video series with six DVDs that demonstrates how bodybuilders prep for shows two to three weeks prior to the event. Active in sports since his early youth, after 20 years of weight training, Maseth set his sights on becoming a professional bodybuilder and quickly climbed the ladder to success. 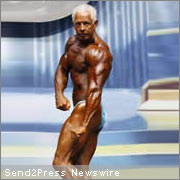 In 2006, he entered his first competition in the National Physique Committee (NPC) Southern USA Men’s over-50 heavyweight division and placed second. He went on to take the second place title in the NPC Battle of Biloxi, NPC Steel World Light Heavyweight, and first place in the Steel World Open.

In 2007, the rhythm continued where he won first place in the men’s over-50 category in the NPC Panhandle showdown, following with another first place in the Southern States, Steel World and a close second in the light-heavyweight divisions.

Maseth attended the nationals in Pittsburgh, his hometown, to compete in front of family and friends where he came in sixth place.

Soon thereafter, after having made a name for himself, Maseth was asked to be the spokesman for the t-shirt company, Muscles by Tank. Their t-shirts have also been sported by Rob Van Dam, wrestler, and Pete Spratt, a mixed-martial arts fighter.

This recognition and success led Maseth to want to share his experiences with current bodybuilders and aspiring bodybuilders. This prompted him to create the Total Body Training DVD series where he speaks from personal experience. His mission is to share his knowledge with others who have the same goals, visions and aspirations.

“I want people to succeed and to feel the same sense of accomplishment that I have experienced,” Maseth says.

Ron Maseth was born in Pittsburgh in 1954. While still young, he relocated to south Florida, where he continues to live today. In addition to being an advocate of the bodybuilding industry, he is available for television and movie modeling, consulting and personal training.