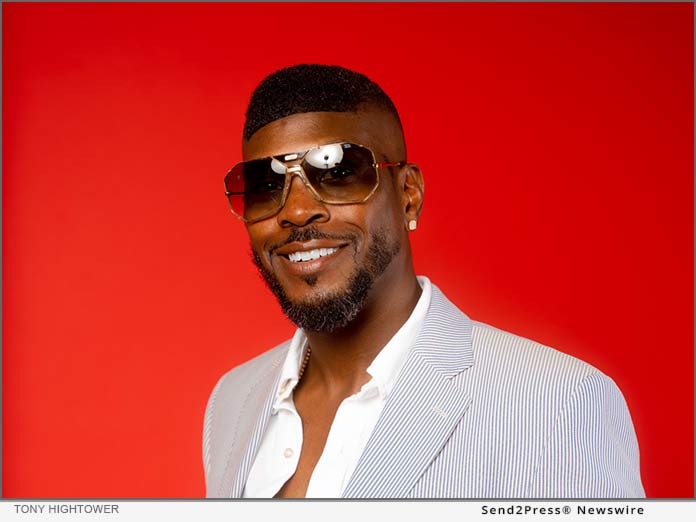 ATLANTA, Ga., Oct 06, 2021 (SEND2PRESS NEWSWIRE) — Singer/Songwriter Tony Hightower is taking up the mantle to be a bridge that ushers R&B audiences into Jazz – Real Jazz. With years of experience as a singer, drummer, and actor (easily recognizable from his work in Tyler Perry movies/TV/stage productions), Atlanta-native Hightower is still just getting started.

His sophomore project, “Legacy,” finds Hightower moving assuredly from original compositions such as the soulful scat-laced “All to the Good,” the seductive Brazilian bossa nova “Rendezvous” and the tender Al Jarreau-esque love beg “I Need You” to swingin’ covers of Earth, Wind & Fire’s classic “Can’t Hide Love,” a mean shuffle boogie through Al Green’s “Love and Happiness” and a smoldering tiptoe through the 1929 Andy Razaf standard “Gee, Baby, Ain’t I Good To You” made further famous in 1944 by

“I didn’t have a choice about doing this music,” Hightower confesses. “My mother, Theresa Hightower, lived her life onstage. She was a fiery and versatile vocal pro by age 16 and had me when she was 19. So, you could say I’ve been performing since the womb.” Growing up under a local legend mother – a Funk-Rocker who could sing anything and mentored many singers coming behind her – Tony learned music first-hand from Bobby Blue Bland and the Platters to Mother’s Finest. And as mother Theresa evolved as a first-class singer – shifting her focus to Jazz that resulted in her historic residency at the Ritz Carlton Hotel in once fiercely segregated Buckhead. GA – so, too, did Tony’s taste begin to broaden.

“When my mom followed Freddy Cole at The Ritz Carlton, he became a fan and then they became friends. Later, Mr. Cole called to ask me to accompany him on drums. By then, he was more like family. One day, he told me in earnest, ‘You need to start writing your own songs. We need new songs!’ I hesitated but by his nudging and God’s, I started on some songs that worked. My hope was to create The New Standard, thus the title/concept of my debut CD.”

A man of the Hip Hop/R&B generation, Tony is known for singing with Soul luminaries such as Gerald Levert, Lionel Richie, Jimmy Jam & Terry Lewis and OutKast. However, the last 7 years have found him totally devoted to jazz, on a mission into bring the real deal to fresh young audiences in memory of his mother and Mr. Freddy Cole, at whose funeral he tearfully blessed in song. “I worked hard on my first record to ensure that my tone was tight and that my songwriting mirrored the timeless songs of yesterday. On Legacy, my sound is evolving into something that’s more uniquely soulful and ‘me’ that I believe the pure jazz world will respect but that can also play in the soul-pop world like Al Jarreau was able to do.”

No statement could be truer with one listen to Hightower’s divinely varied latest offering, Legacy, so titled as a tribute to the memory of his mother who was honored with a proclamation from the city of Atlanta and October 29 being declared ‘Theresa Hightower Day’ upon her passing. “My mother was my best friend,” Tony says softly. “We used to always have this one debate. I’d say music is about melody. She insisted it was all about the lyrics.”

At a recent intimate performance during the Candlelight Series at Piedmont Park, Hightower sang a repertoire of all Ellington music show. Onstage, he spied a pair of pretty ladies who could not have been older than 22. His heart was gladdened. “When I say these things, I really mean it. My influences stretch from Mel Torme’ and Marvin Gaye to Charlie Wilson (lead singer of The GAP Band) and Aaron Hall (lead singer of Guy),” Hightower concludes. “I’m finding ways to sing that makes all of that appropriate. That’s what makes me unique as a Jazz singer.”

Keep up with Tony by visiting:

This press release was issued on behalf of the news source, who is solely responsible for its accuracy, by Send2Press Newswire. To view the original story, visit: https://www.send2press.com/wire/singer-tony-hightower-brings-real-jazz-to-the-young-generation-on-legacy-sophomore-project-richly-inspired-by-his-jazz-singer-mother-theresa-hightower/