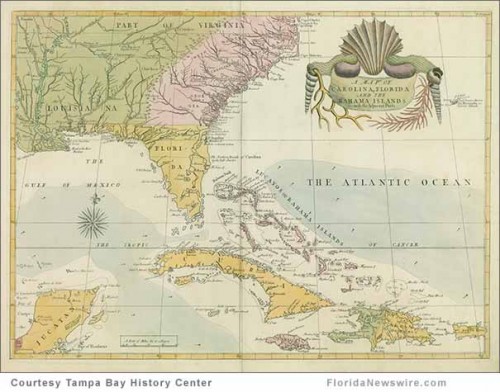 TAMPA, Fla. /Florida Newswire/ — Before the South was “The South,” there was only La Florida. Indeed, nearly 100 years before the English arrived in Virginia, Spanish and French explorers charted a course for “The Land of Flowers.” Marking the quincentenary of Ponce de León’s 1513 landing on Florida’s shores, the Tampa Bay History Center presents Charting the Land of Flowers: 500 Years of Florida Maps, one of the most comprehensive exhibitions of Florida cartography ever assembled.

Opening Sept. 21, 2013, “Charting the Land of Flowers” will bring together 150 maps from museum and library collections around the world, including the Library of Congress, Brown University, and the University of Florida, many of which will be on view to the public for the first time.

The exhibit offers viewers a rare opportunity to see the world as the early European explorers saw it, and to watch the peninsula that would become one of the South’s most populous and diverse states evolve before their eyes. They’ll see that much of the earliest European exploration of North America occurred not in New England, but in Florida and the Southeast, while early railroad maps, atlases, and tourist brochures vibrantly illustrate Florida’s evolution into an agricultural powerhouse and America’s No. 1 tourist destination.

Intricate and colorful ― pink, red, and purple hues abound ― the early maps presented in Charting the Land of Flowers are as much works of art as they are historical documents. Together with manuscript and military maps, satellite images and nautical charts collected for the exhibition, they trace six centuries of exploration, settlement, and growth in the Land of Flowers.

Select maps featured in the exhibition: