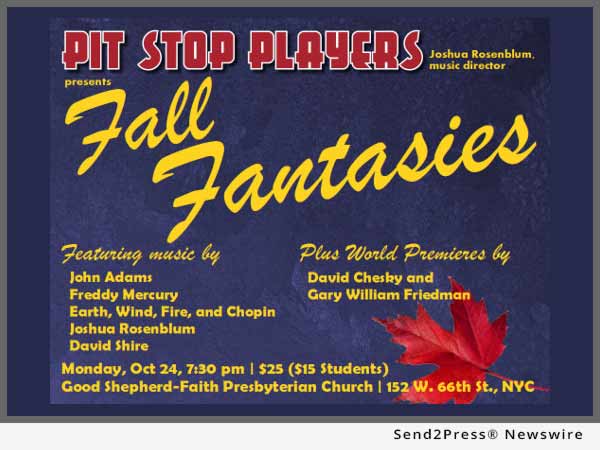 The selections will include John Adams’s “The Chairman Dances,” Freddy Mercury’s “Bohemian Rhapsody, a suite from David Shire’s widely praised score to the film “Return to Oz,” and Pit Stop music director Joshua Rosenblum’s “Nightmare on Ninth Avenue.” The concert will also feature a mash-up of Earth Wind and Fire’s “Fantasy” and Frederic Chopin’s “Fantasie-Impromptu,” with Garah Landes as piano soloist. The concert also includes the world premieres of David Chesky’s “Venetian Concerto No. 3” and Gary William Friedman’s “Dream Within a Dream,” based on the poem by Edgar Allen Poe.

Regarding the programming, Rosenblum said, “I wanted to put together a group of pieces that were all somehow fantasy-related. With some of them, the theme is more obvious than with others. David Chesky said his piece is so hard that actually being able to play it might be a fantasy itself.”

Cited by “The New York Times” for their “flair,” “spirited readings,” and “playfully cohesive programs,” “making an hour-long serving of modern works not just palatable but enticing,” the Pit Stop Players have taken their place at the cutting edge of New York’s cultural landscape, bringing exciting contemporary music to new audiences, and upending conventional assumptions about concert programming.

Founded in 2009 by conductor/composer Joshua Rosenblum, the ensemble is comprised of some of New York’s top freelance musicians, commonly regarded as the best instrumentalists in the world. Repertoire includes arrangements and transcriptions of great pieces from the recent past (encompassing numerous genres), as well as undeservedly neglected classical gems, but the primary emphasis is on new compositions that are both challenging and immediately engaging, written and orchestrated specifically for the group by today’s most exciting creative talents.

Highlights have included the group’s performance of “The Rite of Spring” in a specially-commissioned new chamber arrangement, as well as Rosenblum’s own “Young Person’s Guide to the Pit Stop Players,” with special guest narrator Cynthia Nixon. Last spring at Symphony Space, the Players gave a joint performance with the Brooklyn-based dance company The Chase Brock Experience, an artistic collaboration which zealnyc.com described as “perfecting perfection.”

This press release was issued on behalf of the news source, who is solely responsible for its accuracy, by Send2Press Newswire. To view the original story, visit: https://www.send2press.com/wire/the-pit-stop-players-present-fall-fantasies/

Why would a Russian-Jewish couple, living near Boston, return to the Soviet Union in 1931?