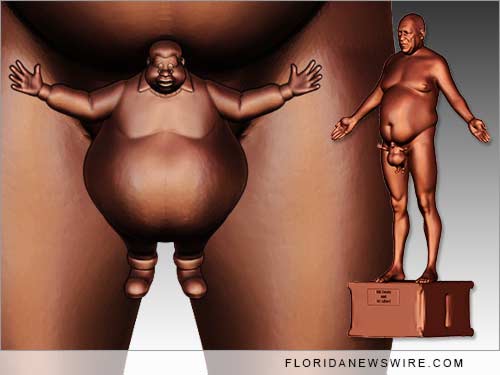 ST. PETERSBURG, Fla. /Florida Newswire/ — Teenage artist Rodman Edwards' protest against Bill Cosby for misrepresenting his TV characters and their messages is proposed as a nude statue of Cosby's Dr. Cliff Huxtable from 'The Cosby Show' to 'replace' the busts of the legendary performer displayed in front of the Academy of Television Arts and Sciences Halls of Fame. The Dr. Huxtable sculpture created by Edwards, is being unveiled by Cory Allen Contemporary Art (CACA).

"Fat Albert Cries for Dr. Huxtable – Proposal for TV Hall of Fame" will open to the public at CACA's The Showroom, the world's first public relations gallery, located in the Warehouse Arts District in St. Petersburg, Fla., on February 20, 2015. For more information, contact Cory Allen at 323-393-3115 or visit http://www.cacanet.com/ .

The statue depicts Cosby's Dr. Huxtable — nude, aged and out of shape, with Cosby's Saturday morning cartoon character Fat Albert blocking the area where Dr. Huxtable's genitalia would be, crying.

"Rodman captured Cosby's real character," said the artist's spokesman Cory Allen. "I think this is a more appropriate statue than the one depicting America's Dad at the TV Hall of Fame."

"Hall of Fame statues should not be exempt from reevaluation. Sometimes they need to be removed or replaced," said Cory Allen. "Joe Paterno's statue was taken down following the 2011 Penn State sex abuse scandal. Maybe the TV Hall of Fame and Disney should take note," added Allen, referring to Disney World, the Academy of Television Arts and Sciences east coast location.

"As a fan, I think I just felt compelled to depict two of Bill Cosby's creations at odds with each other, because Bill Cosby seems to be at odds with what I always thought Dr. Huxtable stood for," said artist Rodman Edwards.

This is Rodman Edwards's first representation by CACA. Rodman, a freshman in high school, has shown his work at Mask Fest in Indianapolis and at Son of Monsterpalooza in Burbank, California, and has lent his large mask of Hillary Clinton to an anti-Keystone pipeline demonstration at a democratic fundraiser attended by Clinton in San Francisco.