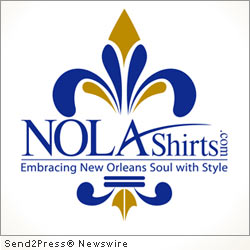 NEW ORLEANS, La., March 7, 2012 (SEND2PRESS NEWSWIRE) — In the aftermath of the recent Mardi Gras madness that engulfs New Orleans this time of the year, one man’s hope to bring awareness to the city’s unique nature and spirit has emerged in the public eye, and caught national attention. A few days following Hurricane Katrina’s impact on the city, Billy Schell, Owner/CEO of NOLA Shirts, created a brand embroidered on high quality shirts, hats, and apparel with some of the more popular icons of the city – the Fleur De Lis, the Pelican and the Mardi Gras Crown.

He wanted the shirts and apparel to allow those who left the city, or had visited the city to show their support for the recovery, and for the spirit of the people in midst of rebuilding their lives.

He sold these products by hand, going to various local shops and store owners, asking them to join in the effort, and help him promote the idea. The idea caught on, and several local locations began carrying the apparel, along Magazine Street, and Prytania Street, as well as in Metairie. He also was happy to his shirts become a regular item at the Hilton at New Orleans Airport, a very busy location during the recovery and rebuilding process.

When the BP Horizon Deepwater oil spill disaster also struck a staggering blow to New Orleans, Billy included a new symbol in his apparel – the Pelican. This symbol, along with the national concern about the oil’s effect on the wetlands, drew more attention to the area, and NOLA Shirts became a rallying point for many peoples concern and pride in the New Orleans community. Former alumni, and past residents who had been forced to leave alike, began wearing the shirts, to show their support, and the love for the city’s unique way of life, and attitude towards the continued recovery efforts.

This became even more apparent when New Orleans resident, and political contributor for CNN, James Carville, often referred to as the “Ragin’ Cajun” appeared on John King’s television program sporting a NOLA shirt. Since then, several celebrities and supporters of the New Orleans soul and spirit have been spotted sporting the NOLA Shirts apparel – both in the city and abroad. Recently, Will Ferrell, who was in the Mardi Gras Celebration this year as King Bacchus, and Matthew McConaughey were provided with NOLA shirts apparel as an appreciation for participating in the New Orleans festivities.

“We wanted to give the people who have experience the vibrant culture and soul of the city of New Orleans a way to show support and appreciation of the New Orleans way of life. New Orleans truly is a city like no other in the United States – known for its unique architecture, laissez-faire attitude, amazing foods, and historic tradition that exist no where else,” said Billy Schell, owner of NOLA Shirts. “There is a magical aspect to New Orleans; once you have experienced it, you realize how special the city truly is – and this clothing line was setup to allow people to show their love of it.”

NOLA Shirts continues to provide awareness for the Crescent City – through its hardships, and its celebrations. The subtle message of pride and hope have helped it to become a quiet success story in the midst of all of the turmoil, and the future continues to look brighter – both for the city, and its recovery from recent times, and for its residents – like Billy Schell, who decided that even in the worst of times, showing some civic pride and his love for the Crescent city, he would create a way to allow others to embrace New Orleans soul and spirit – with style.

About NOLA Shirts LLC:
NOLA Shirts is the proud provider of high quality shirts, hats, and apparel embroidered with the many symbols of New Orleans spirit and soul – the Mardi Gras Crown, the famous Pelican, and the venerable Fleur De Lis. These products were designed to help others show their love of one of America’s most authentic cities, but to also represent and embody the resilient spirit of the people and culture of New Orleans. To learn more about NOLA shirts, you can visit their website at http://www.nolashirts.com – or contact Gretchen Zito, Marketing Director at (601) 955-0225.

News Source: NOLA Shirts LLC :: This press release was issued on behalf of the news source by Send2Press® Newswire, a service of Neotrope®. View all current news at: http://Send2PressNewswire.com .

Running Of The Bulls Only Sorta Canceled Due To Pandemic – 14th rendition of San Fermin in Nueva Orleans changes format, again