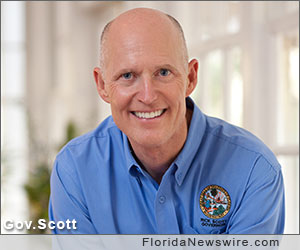 Governor Scott said, “In the last two years, we have created around 200,000 new jobs, housing starts are up again, and the unemployment rate has now dropped by more than 3 percentage points. I applaud Dr. McClure and Mr. Gidel for their work in growing jobs and opportunities for Florida families, and for their support of smaller government, less regulations, and lower taxes.”

Dr. McClure, III is the President and CEO of JMI. He was appointed by Governor Jeb Bush to the Florida Elections Commission and has served on the State of Florida Education Strategic Planning Council. Dr. McClure served on the Florida Advisory Council of the National Center for Policy Analysis. He was appointed to the Florida Committee for the U.S. Commission on Civil Rights and is a member of the Editorial Board for the Journal of School Choice.

Robert Gidel is a board member of JMI. In April of 2009, he was appointed to a four year term on the Investment Advisory Council to the State of Florida Board of Administration, which oversees the Florida Retirement System along with other managed State Funds. He was elected Chairman of the IAC in March of 2011. Also in March of 2010, he was elected to the Board of Trustees of the University of Florida Investment Company, which manages the University’s endowment fund.