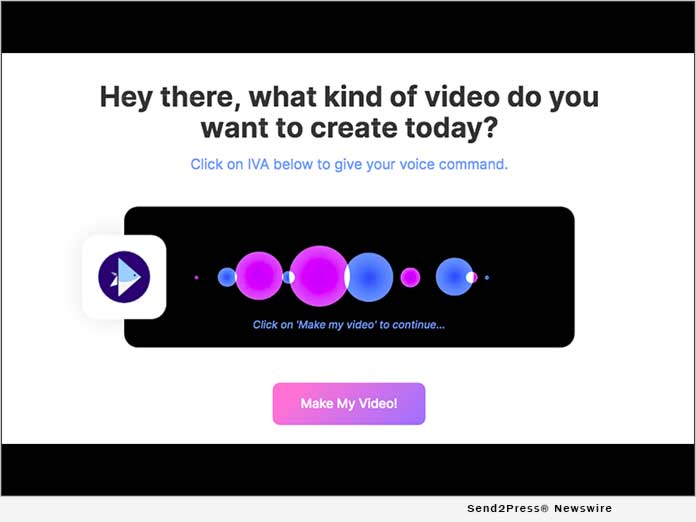 The campaign was so convincing the company’s main competitors even put their names down to be the first in the know on IVA (Intelligent Video Assistant).

InVideo got members of the platform in on the joke, who posed up as members of the BETA group, and posted videos of their own showing themselves using the system, discussing how “brilliant” the new technology was.

The company announced its ‘world first’ in the days running up to April 1, 2021, inviting people to sign up to be the first to try IVA out.

Using a specially created landing page, CEO of InVideo Sansket Shah demoed IVA and pushed her revolutionary abilities on social media declaring she was not only a rival to Alexa and Siri, but pushing technological frontiers.

The brand also sent out a newsletter getting even more sign-ups with calls to readers to take advantage of their 22nd Century style technology.

The deadline to sign up? Midday Indian Standard Time April 1st of course.

InVideo’s Prila Loof (an Anagram of April Fool) who worked with the AI Technology Division of InVideo was quoted as saying: “IVA works by using machine-learning algorithms and neural networking that are a direct copy of the human brain’s pathways.

“Once you have given InVideo permission to use the microphone you can speak directly to IVA. Within a couple of minutes, the video is created.”

Thousands took the bait on how IVA used the speech and thought patterns of the human brain so users could create videos without lifting a finger.

CEO of InVideo, Sansket Shah revealed to those who signed up: “I’m really sorry about this, but this entire IVA thing isn’t true. It’s an April Fool’s joke. But thank you everyone for participating. We are so sorry for pulling this prank on you.”

InVideo made their reveal sending them a newsletter and posting on social media after midday on April 1st it was an April Fool’s Day prank.

But while IVA’s “look no hands” AI feature doesn’t exist on the platform just yet; they believe it will only be a matter of time.

Sansket added: “At some point in this journey of building InVideo, IVA will truly become a reality. It is true it’s where we want to go in video content creation in the next 10 – 15 years.”

InVideo.io is the world’s first watermark-free video editor that makes video creation easy, quick, and flexible online. The platform helps create professional and creative videos while cutting across barriers such as a user’s geographical location, language, type of device they use, and even their internet speed. The application helps create and edit videos online with zero barriers.

InVideo’s vision reflects in the generous pricing plans and in the easy-to-use product with 4000+ video templates and 8mil+ strong media library, that includes the world’s best stock footage online, like iStock.

InVideo raised a $15 million Series A from Sequoia Capital India. Tiger Global, Hummingbird, RTP Global and Base also participated in the round that was closed in October 2020.

Furthermore, InVideo is the only company in India, today, with users from as many countries in the world (195+). The company is truly spearheading the growth of prosumer SaaS in India.

This press release was issued on behalf of the news source, who is solely responsible for its accuracy, by Send2Press Newswire. To view the original story, visit: https://www.send2press.com/wire/invideos-april-fools-day-world-first-ai-voice-assistant-video-editor-ad-campaign-gets-over-2000-new-sign-ups/