Home National US News Kalyagen Announces Release of ‘The Stemregen Effect’ Commercial with Three Former UCLA Players to Coincide with the Bruins Advancing to the...
SHARE
Facebook
Twitter 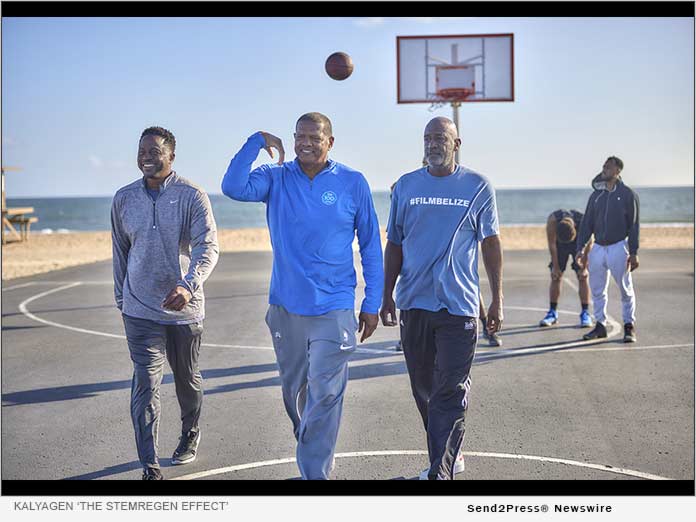 “We were delighted to have three generations of former NBA players participate in the first ad of our “Stem the Tide of Time” campaign,” said Christian Drapeau, CEO and Chief Scientist of Kalyagen™. “We are doubly pleased to be able to showcase this ad as these three former UCLA basketball standouts celebrate UCLA’s appearance in the Final Four and demonstrate how Stemregen has been able to help them to stem the tide of time.”

The ad, part of the “Stem the Tide of Time” campaign designed to increase awareness of STEMREGEN®, is being released to coincide with the Bruins first Final Four appearance since 2008.

“Years of jumping and running up and down high school, UCLA and NBA floors have taken their toll on all of us,” said Nigel Miguel. “I couldn’t be happier to show what ‘Stem the Tide of Time’ means for me along with my former UCLA colleagues Marques and Mitch at the same time the Bruins are about to play in the Final Four. And yes, Marques can still dunk at 65!”

STEMREGEN® is a unique and patent-pending blend of proprietary plant-based extracts documented to support ESCM and increase the number of circulating stem cells, supporting the natural ability of the body to repair and stay healthy. Ingredients in STEMREGEN® have been investigated in more than eight studies for their effect on stem cell function, of which five were randomized, double- blind, placebo-controlled human clinical trials. STEMREGEN® has wide application in antiaging and overall health maintenance.

Kalyagen™ was founded by Christian Drapeau, author of the bestseller Cracking the Stem Cell Code. Kalyagen is a leader in the research and development of natural products aimed at supporting stem cell function of the body. Stem cells constitute the natural repair system of the body, and stem cell enhancers have been documented to strongly contribute to improving health and quality of life. STEMREGEN® is the first product developed by Kalyagen™. STEMREGEN® is a unique blend of proprietary plant-based extracts documented to support Endogenous Stem Cell Mobilization and provide other health benefits.

Nigel Miguel was the first Belizean to play in Division I sports. In his final season with the UCLA Bruins, Mr. Miguel earned All-Pac-10 honors and was also named Pac-10 Defensive Player of the Year while helping lead the Bruins to the 1985 National Invitation Tournament championship. Best known for his role as “Dwight the Flight” in White Men Can’t Jump, Mr. Miguel has been in numerous television and movie productions, both in front and behind the camera. Mr. Miguel currently serves as Film Commissioner for Belize.

DISCLAIMER: None of the statements contained in this press release have been evaluated by the Food and Drug Administration. The products and information in the release are not intended to diagnose, treat, cure or prevent any disease.

This press release was issued on behalf of the news source, who is solely responsible for its accuracy, by Send2Press Newswire. To view the original story, visit: https://www.send2press.com/wire/kalyagen-announces-release-of-the-stemregen-effect-commercial-with-three-former-ucla-players-to-coincide-with-the-bruins-advancing-to-the-final-four/