MIAMI, Fla. /Florida Newswire/ — In a new book from Createspace Publishing, “Under Nuclear Attack” (IBSN 978-1438253619, 338 pages, $9.95, currently available at Amazon.com), author AJ Cushner introduces us to retired CIA Agent Josh Parker and draws us into the dark world of nuclear terrorism. “The events, places and characters are very real and the line between fact and fiction is a blur to the reader,” the author says. “The novel is a fast-paced global thriller that ignites the frightening truth about our vulnerability – nobody is safe in the world anymore.” 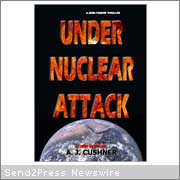 The writer lives in Florida. A master storyteller, retired newspaper and magazine columnist, Cushner is a former civil rights lawyer, administrative judge, and minister. He is a graduate of Boston Latin School, Bowdoin College, and Boston University Law School. Fluent in Spanish, he currently volunteers two nights a week teaching English classes to Hispanoparlantes. He writes a monthly article for a Washington Human Resource organization that is read by thousands of Fortune 500 human resource workers around the country. His novel depicts the places he has traveled in Europe, Central and South American. He is a sailor, a private pilot, mountain climber, avid trap and pistol shooter, fly-fisherman and downhill skier. This is the first of a series of Josh Parker novels.

Contact: Mr. Cushner is available for speaking engagements and book signings. He may be contacted at (561) 352-4148 or through email at ajcushner@comcast.net.

“Under Nuclear Attack” takes us from the edge a Russian nuclear storage facility into the rivers of Central America and finally into mid-town Manhattan. While America nervously guards against another terrorist attack, Washington learns that Russian General Viktor Valentyn has sold weapon-grade cesium to terrorists. Retired CIA Analyst, Josh Parker – the son of Russian Jews who was launched straight out of Boston Latin School to serve a controversial career at CIA – is snatched out of his teaching job at Boston University to stop the dirty bomb delivery boys. As the clock clicks down toward the zero hour, Washington choreographs an international manhunt that pits the aging Parker against one of the world’s most cunning villains. Arriving in Nicaragua, Parker pulls the decaying body of his contact out of a river and escapes death only to face an unforgiving jungle. While Washington sends Matt Walker to find Parker, the beautiful wife of Parker’s murdered contact finds Parker and rescues him. Parker and Matt Walker then face the terrorists on the back rivers of Central America, the Pan-American highway, Detroit, and finally into New York City – where a nuclear holocaust awaits.

Martin Lobel, Washington DC Literary Attorney and Writer says: “I started the book right after dinner and had to finish it before I fell asleep. A marvelous tale. I just hope the system functions as well as he writes.”

Robert P. Smith, CEO and Co-Author of “Riches Among the Ruins: Adventures in the Dark Corners of the Global Economy” writes: “Under Nuclear Attack is a riveting thriller that has the potential of being a blockbuster best seller. Better than any Ludlum or Patterson novel that I have read. I could not put the book down until the very last page.”

John La Torraca from California writes: “I thoroughly enjoyed ‘Under Nuclear Attack’ – my kind of story. I am looking forward to reading Josh Parker’s next adventure.”

L. Rheinheimer, a critical reader writes: “This is the most relevant and gripping narrative I have read in a long time. This is a must read for anyone who wants insight into the goings-on of the reality of the world today. This should be required reading for every American.”

Frederic B. Cohen, a Florida reader writes: “A terrific storyline with several ‘in your face’ characters and lots of great locations – could not help visualize the action as it might appear on film. I grew up in Boston and the scenes painted by Cushner were ‘spot on,’ especially the Community Boating Club. The book flies.”

Former FBI Agent Turns Back the Clock with Release of Book, ‘784 Broadway’