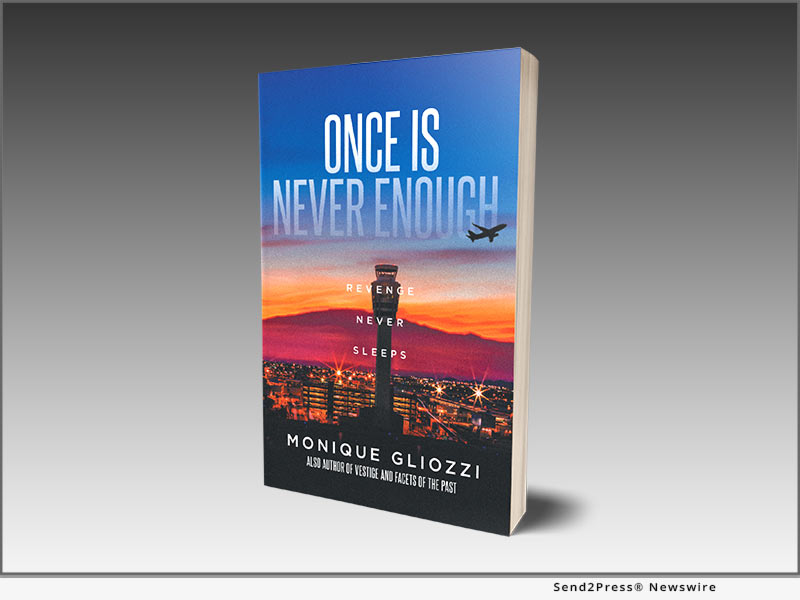 Released in June 2022, “Once is Never Enough: Revenge Never Sleeps” tells the story of Larissa La Roche, heiress to a multimillion-dollar wine production empire in Napa County, who is led down a path of deception and destruction when her dormant, tragic past returns to haunt her. Taking the reader on a journey across the globe, the story also re-introduces fan-favorite character, Isabella Ashford, who is tasked with hunting down this unusual suspect, tenaciously venturing across the United States and into Europe to stop the dangerous sociopath in her tracks.

“I have been asked by my fans whether I would write another adventure involving Detective Isabella Ashford, who was the main protagonist of my very first book ‘Foresight’ and then its follow on, ‘Hunted,'” said Gliozzi, when asked about her latest novel, “This time I felt like upgrading her status from a detective to FBI field agent. She is a lady with a strong sense of intuition and psychic abilities which has served her well so far.”

With an abundance of 5-star reviews under her belt for not only “Foresight” and “Hunted,” but also her standalone novels “Vestige,” “Facets of the Past” and her collection of short stories, “Diversity,” this latest story from Australia’s most prominent up-and-coming thriller writer is set to hook fans from the first page.

DR. MONIQUE GLIOZZI works as a psychiatrist, clinical lecturer and pilot in Perth. “Once is Never Enough: Revenge Never Sleeps” is her sixth novel. To learn more about Monique, her novels, and the rave reviews they’ve received, visit https://moniquegliozzi.com/.

“Once is Never Enough: Revenge Never Sleeps” is now out through Tellwell Publishing (RRP $21.99) and available through Amazon, Barnes & Noble, Indigo and more.

This press release was issued on behalf of the news source, who is solely responsible for its accuracy, by Send2Press Newswire. To view the original story, visit: https://www.send2press.com/wire/revenge-never-sleeps-is-anyone-safe-master-thriller-writer-releases-cat-and-mouse-revenge-story/