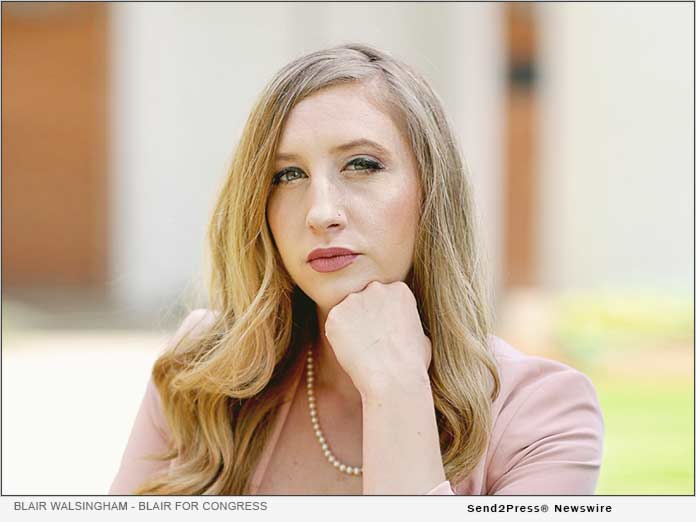 EIDSON, Tenn., Aug 07, 2020 (SEND2PRESS NEWSWIRE) — Blair Walsingham, Democratic Congressional nominee in Tennessee’s 1st District will award two “Freedom Grants,” $500/month for one year to district residents. Walsingham says that her Freedom Grant, not dependent upon a vote for her, is intended to “empower individuals to move beyond survival.” If elected, she will seek legislation for a Freedom Dividend, a monthly basic income of $1000 to Americans 18 and over.

Walsingham says that corporations thrive on benefits from tax dollars, and says, “It’s time for taxpayers to thrive too.” Walsingham cites direct cash distributions by Dolly Parton following the Gatlinburg fires, and per capita distribution in the nearby Eastern Band of Cherokee Indians, as models of basic income. “In the EBCI, this practice improved quality of life and increased opportunity,” says Walsingham, who interviewed Principal Chief Sneed for her podcast.

While basic income plans vary, Walsingham’s plan is universal. “This dividend unites Americans with a shared benefit of citizenship,” she says, pointing out that while her plan could eradicate poverty, the advantages are not just for low income households.

“Middle class Americans,” adds Walsingham, “are suffering from debt and healthcare bills.” A common rationale for basic income is automation in the workplace, which the McKinsey Global Institute says may eliminate 73 million jobs by 2030.

Interest in basic income has grown during COVID-19 after Congress passed a round of stimulus checks. A trial UBI in Stockton, Calif., showed that recipients increased spending on food by 12% from the same time last year.

More money in the hands of Americans means more spending. Walsingham says we can “replace the cycle of poverty with a cycle of prosperity,” and that her campaign’s Freedom Grant initiative is a step in that direction.

If elected, Blair Walsingham would be the first Democrat to represent Tennessee’s 1st District in over a hundred years.

Blair Walsingham, candidate for U.S. Congress, TN-01, is endorsed by key community and national organizations, including former presidential candidate Andrew Yang. Running on a platform of health, freedom, and financial security, Blair is a veteran, small business owner, and resides in Hawkins County with her family.

*Link to images for media: https://drive.google.com/drive/folders/1-0VA6dom6xN7b2b3_jR1dYE7eW01Vkhh

Paid for by Blair For Congress

This press release was issued on behalf of the news source, who is solely responsible for its accuracy, by Send2Press Newswire. To view the original story, visit: https://www.send2press.com/wire/tennessees-1st-democratic-nominee-blair-walsingham-announces-the-freedom-grant/

Walsingham and Yang Team up to Promote Basic Income in Tennessee