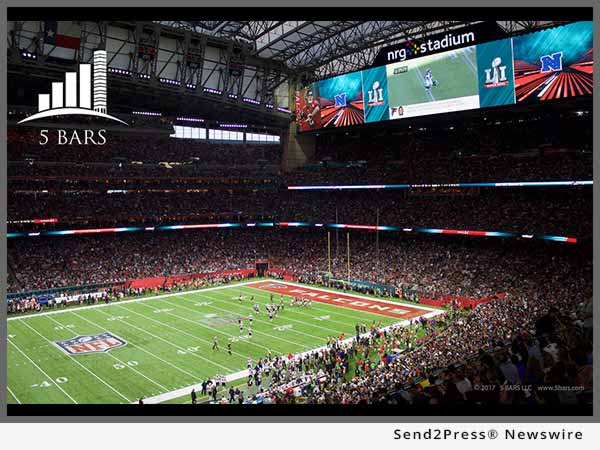 5 Bars worked with the NFL, Verizon, Super Bowl Host Committee, Harris County Sports & Convention Corporation and SMG to plan, design and build the technologically advanced high density Wi-Fi network to support the specific needs of the sellout crowds at NRG Stadium for the 2017 Super Bowl. Connectivity was the top priority to ensure maximum fan interaction during the big game.

“We are beyond pleased with the performance of the network 5 Bars delivered to NRG Stadium on Sunday. The day was filled with new records and unexpected outcomes, and we are so proud to be a part of history,” said Monnie McGaffigan, President of 5 Bars. “The partnership and team work involved to bring a state of the art Wi-Fi network and exceptional experience to 77,000 fans was nothing short of herculean,” declared McGaffigan.

This press release was issued on behalf of the news source, who is solely responsible for its accuracy, by Send2Press Newswire. To view the original story, visit: https://www.send2press.com/wire/5-bars-resets-the-wi-fi-bar-for-wireless-data-usage-and-performance-during-sundays-super-bowl-li/