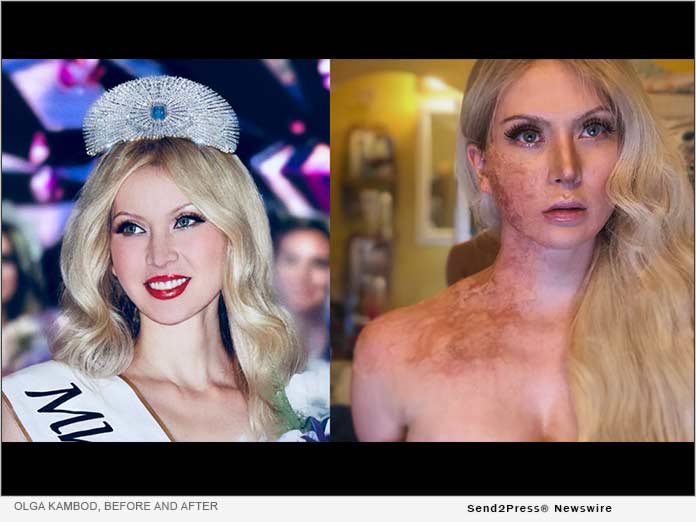 PASADENA, Calif., Mar 03, 2021 (SEND2PRESS NEWSWIRE) — Olga Kambod, a Pasadena, California resident, was the victim of a brutal acid attack which scarred the right side of Her face. And while she may have been the victim in the incident, her attitude is far from someone who’s giving in to her attacker.

“After the attack happened, I started researching acid attacks and was stunned to find that I was not alone here,” she says. “There are many people who have suffered similar injuries.”

In fact, acid attacks happen across the world with a disproportionate impact on women. According to Acid Survivors Trust International (A.S.T.I.), acid attacks reflect and perpetuate discrimination of women and girls in society, and is prohibited by international law. However, all too often, it’s a crime that goes unreported and unpunished because survivors of acid attacks live in fear of reprisals for reporting the attack.

“Many people who experience such an attack have a difficult time regaining confidence and even leaving the house,” she says. “It’s just so emotionally difficult. I can relate and have worked to rebuild my life,” she explains.

When Kambod posted some photos and explained the incident on her Facebook page, she received an onslaught of comments and questions related to acid attacks. So, she decided she wanted to focus some of her attention on raising awareness about the subject in the U.S.

Kambod immigrated to the U.S. from Russia, where she was a model and beauty contest winner. She’s been in the U.S. for 10 years and is a law school graduate, working to pass the BAR. She plans to concentrate her practice on helping women and men who have been the victims of domestic violence and abuse.

This press release was issued on behalf of the news source, who is solely responsible for its accuracy, by Send2Press Newswire. To view the original story, visit: https://www.send2press.com/wire/california-woman-survives-acid-attack-and-works-to-raise-awareness/