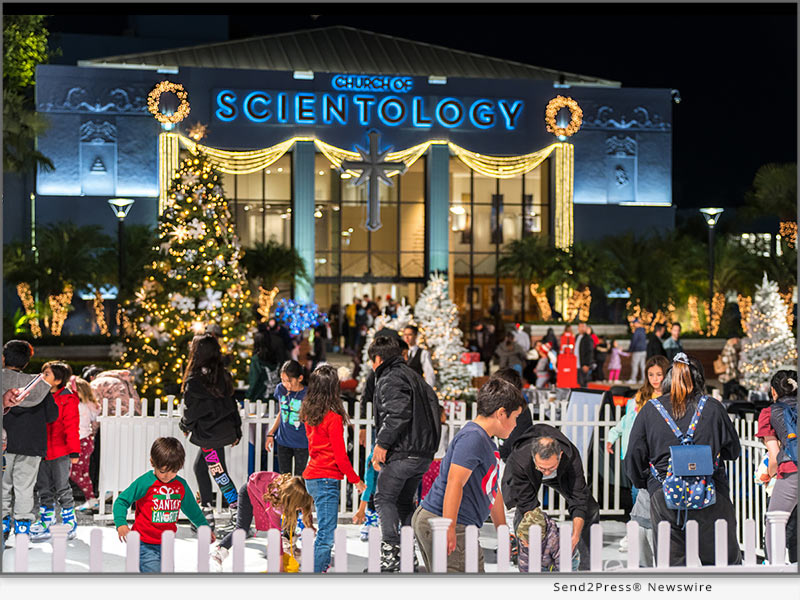 HOLLYWOOD, Calif., Dec 05, 2022 (SEND2PRESS NEWSWIRE) — Hundreds of families headed to the Church of Scientology for an afternoon and evening of family fun. The annual Holiday Lights Festival included a special appearance of Santa and his elves. As is his custom in Hollywood, Santa arrived in a yellow mustang. This year he brought with him kids from Inner-City Shakespeare, who entertained the crowd by singing “All I Want for Christmas” and dancing to “Santa Claus is Coming to Town.”

The young performers were each presented with a Teddy bear and then joined Santa on the red carpet, where they helped him flip the switch, illuminating two city blocks of magical holiday lights.

The deputy fire chief inaugurated the L.A. Alliance’s annual toy drive. He stressed how rewarding it is to give back during the holidays and that the Church of Scientology embodies this now and throughout the year with its community functions. Drop off a new gift at the toy drive station at the Church of Scientology at 4810 Sunset Blvd. and help ensure a Merry Christmas for underserved children in the community.

In preparation for the annual Winter Street Fair on L. Ron Hubbard Way, the North Pole was installed, including the kid-sized ice-skating rink and snow slides. From 3 p.m. on, children skated and played in the snow, had their faces painted, and posed for selfies with Santa.

Mr. Jeff Zarinam, board member of the Hollywood Chamber of Commerce and chair of the Board of Trustees for the Hollywood Sign, which will celebrate its 100th anniversary in 2023, presented the Church with a certificate of recognition:

“On behalf of the Hollywood Business District, we would like to extend our sincere appreciation to all Church of Scientology volunteers in Hollywood for your tenacity and tireless hard work in keeping Hollywood beautiful and contributing more than 4,500 volunteer hours to de-litter, pressure-wash, landscape, paint and beautify our Hollywood cityscape this past year.”

“You are stellar examples of being great civic leaders for your dedication to Hollywood and East Hollywood communities and making our city a better place to live, work and play.

“Thank you all for brightening this holiday season with the 2nd Annual Holiday Lighting Festival and for being angels in the City of Angels.”

Los Angeles Scientology Churches serve as hubs for religious organizations, like-minded groups and community leaders all over the Southland, welcoming all cultures, all religions and all nationalities to create a positive Los Angeles.

This press release was issued on behalf of the news source, who is solely responsible for its accuracy, by Send2Press Newswire. To view the original story, visit: https://www.send2press.com/wire/family-fun-at-the-holiday-lights-festival-at-the-church-of-scientology/