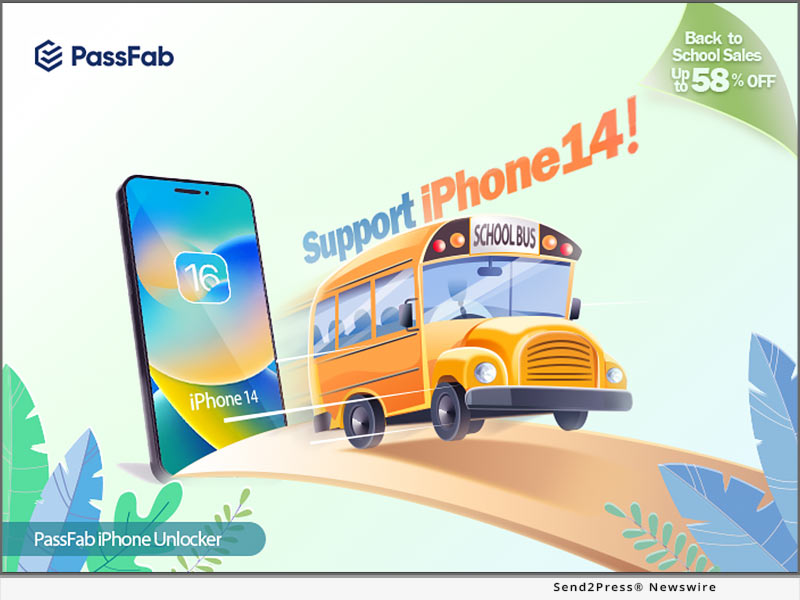 NEW YORK, N.Y., Sep 28, 2022 (SEND2PRESS NEWSWIRE) — Forgetting the password or passcode of an iPhone is most likely to be the worst nightmare of any iPhone user around the world. However, there a remarkable and easy alternative to this nightmarish situation and it is called the PassFab iPhone Unlocker. PassFab has been known worldwide for helping people get access to their lost devices, especially when they forget their passwords and with this all-new as well as updated PassFab iPhone Unlocker, iPhone users can now unlock their brand new iPhone 14 featuring the all-new iOS 16.

Moreover, PassFab has also announced a staggering discount of 58% off with its back-to-school promotion offer to make this software more affordable than it already is for everyone.

“We are overjoyed to tell everyone that our all-new and updated version of the PassFab iPhone Unlocker software is now compatible with the latest iPhone 14 and the impressive new iOS 16,” said the spokesperson of PassFab, while announcing the launch of iOS 16 compatible PassFab iPhone Unlocker. “PassFab can unlock any iPhone without passcode, and it will continue to work with the older versions of iOS, as well as the older versions of iPhones,” the spokesperson added.

In addition, the team of PassFab has also made another astonishing announcement, which makes this software even more affordable for everyone than it already is. With the launch of an exciting new ‘Back to School’ offer by PassFab, users can now avail a special promotional discount of 58 percent on this software. The question that how to get into a locked iPhone without the password is one of the most widely searched phrase on Google and the most effective answer is hidden in PassFab iPhone Unlocker.

PassFab iPhone Unlocker is simple and easy to use for anyone who forgot their password. How to get into a locked iPhone without the password has troubled literally millions of iPhone users around the world but the user-friendly interface of this software makes it easier for everyone to unlock the iPhone without the passcode, especially without fearing if their iPhone is disabled. For those who want to know how to break into an iPhone, which means their own iPhone, PassFab software does the job in very few simple and easy steps.

For more information to get into a locked iPhone 14 without the password today, get the PassFab iPhone Unlocker with 58% discount, please visit:

PassFab was founded in 2010 as a leading password recovery tool developer, and it has now expanded to a range of software and online tools to make the lives of its users easier worldwide.

This press release was issued on behalf of the news source, who is solely responsible for its accuracy, by Send2Press Newswire. To view the original story, visit: https://www.send2press.com/wire/how-to-get-into-your-locked-iphone-14-without-the-password-passfab-iphone-unlocker/

How to Unlock an iPhone without Passcode: PassFab iPhone Unlocker for iOS 16

How to Unlock an iPad Passcode without a Restore: PassFab iPhone Unlocker