SCOTTSDALE, Ariz., Apr 22, 2020 (SEND2PRESS NEWSWIRE) — iQ International AG (ISIN CH0451424300/WKN A2PAA5/Symbol IQL), a multinational Sustainable Technologies company publicly traded on the Regulated Market of the Frankfurt Stock Exchange with its global head office in Zug, Switzerland and North American headquarters in Scottsdale, Arizona, is adding three industry leaders to its Advisory Board to assist the Company in its expansion plans. 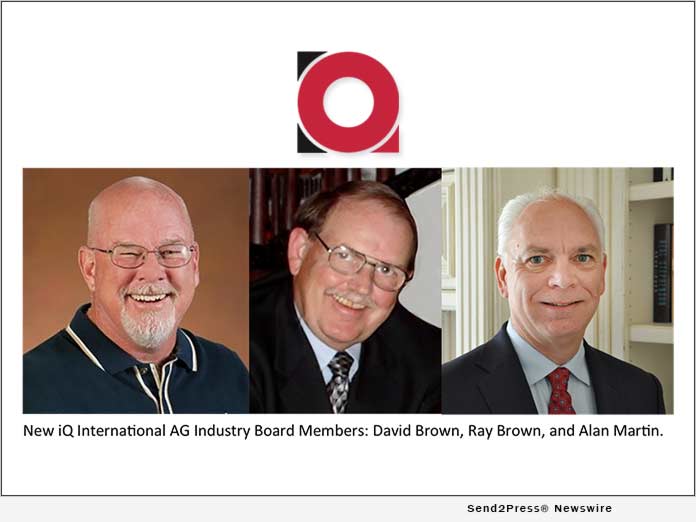 Ray Brown: Ray has spent the past 35 years with a specific focus on the energy storage industry. He retired from JCI in 2010, where he served 30 years in various global leadership roles in the Power Solutions division build-up. Since then, he has served on multiple Boards of Directors, including Amara Raja Batteries Ltd. in India.

“It is an honor to work with these distinguished individuals who truly built this industry and its leading companies,” said Kevin T. Loman, iQ International AG CEO. “iQ’s executive management team and I are fortunate to have access to the wisdom and experience these gentlemen bring to the company as we grow to meet an ever-increasing industry demand.”

As previously announced, iQ International AG is expanding its operations and integrating its technologies into existing manufacturing operations to secure capacity to meet the growing demand it is facing for batteries with its 360 Mixing(TM) technology. These three new members will join the Industry Advisory Board’s chairman, Michael Tapp, who also serves as a member of the Company’s Board of Directors, and they will be an integral part of iQ’s integration process execution and oversight.

A growing market for SLI technology

Demand for higher performance SLI batteries continues to accelerate. To comply with increasing environmental regulations mandating CO2 emission reductions, OEMs are utilizing start-stop, passive boost, and regenerative breaking technologies. In addition, consumer demand for cutting-edge infotainment/comfort features and improved passenger safety requirements have led car manufacturers to install ever increasing numbers of electrical components in automobiles, significantly increasing the electrical load on auto batteries. iQ’s 360° Mixing(TM) batteries are replacing major known national brands, and iQ and its distributors have won significant tenders in the UAE and U.S. with government and private fleets. iQ’s technologies are seamlessly integrated into the existing production processes and offer one of the most cost-effective ways to meet these increasing battery performance requirements.

“We are so excited about the growth opportunities for this market and to be able to do it in a way that will have a positive impact on the environment,” said Roland Koch, member of iQ International’s Board of Directors. “Our goal is to increase our market share and help reduce the CO2 load that the transportation industry adds to the environment each year, helping car makers meet the stringent emissions reduction mandates.”

It is estimated that by 2025, the market demand for Absorbent Glass Mat (AGM) and Enhanced Flood Battery (EFB) with 360° Mixing(TM) battery types will be 150-180 million annually, nearly 30% of the total market. iQ’s EFB with 360° Mixing(TM) matches or exceeds the performance of the more expensive and heavier AGM battery widely used and promoted by industry incumbents.

More information on iQ’s expansion plans and leadership team is available on its website, https://www.iqint.com/.

Batteries with iQ International AG technologies are designed to generate better performance in today’s highly electrified vehicles, particularly vehicles with Start-Stop applications. Studies have shown that if the Company’s technology was the standard in the industry approximately 15 million tons of CO2 would be saved in the transportation industry each year, helping car makers meet the stringent emissions reduction mandates.

This press release was issued on behalf of the news source, who is solely responsible for its accuracy, by Send2Press Newswire. To view the original story, visit: https://www.send2press.com/wire/iq-international-ag-adds-industry-leaders-to-its-advisory-board/

Fanplayr Appoints Three New Members to Its Board of Directors