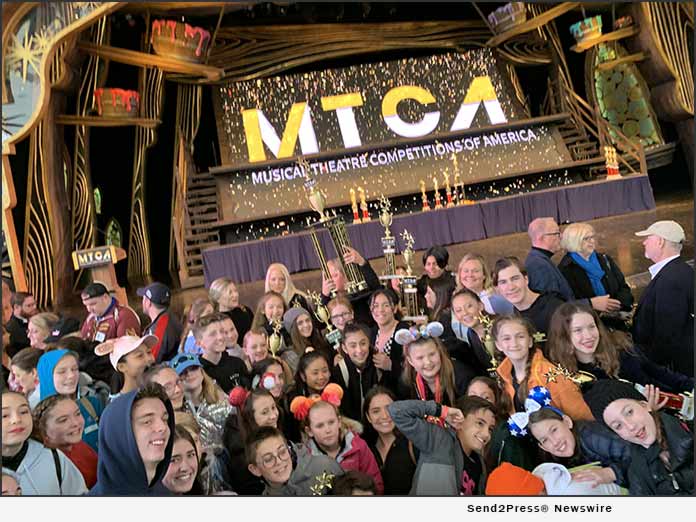 Top performance studios and public schools from around the country as far as Maine, Florida, Nevada and New Mexico traveled to Southern California to compete in the prestigious “The Musical Theater Competition of America” at Disneyland. Schools competed in different levels celebrating a 9 – 12 minutes medley of a musical as well as solos and duets in voice and acting and technical disciplines. The school with the top combined scores won the coveted “Sweepstakes” title of Top Musical Theater Program.

“Center Stage parents, you need to thank your studio administrators for having the honor of being a part of a truly remarkable studio. I am blown away,” says Gary Krinke, MTCA Adjudicator and Fullerton College Theater Arts Administrator.

The Center Stage Studio opened its doors 15 years ago in 2005 with one room, a stage made out of boxes and a shower curtains sewed together for a stage curtain.

Modest means however big dreams by studio founder Tracey Ball. “I used to wake up at 6 a.m. and bring my pillow to my studio and lay by the phone in case it rang. It’s one thing to have a dream but you hope that others believe in you too!”

Within one year, Tracey went from 18 students to over 200 being one of the 1st schools to secure licensing to “High School Musical.” Within 5 years CSS acquired a theater, this time with real curtain rigging, an elevated stage and tech booth; Along with a full conservatory with classes in voice, acting, comedy, jazz, tap, ballet, hip hop, lyrical and acrobatics. A true triple threat performing arts center for kids.

“I grew up in Foster homes aging out when I was 17. My last foster family saved my life. I know what it is like not to fit in having gone to 8 elementary schools and 3 high schools. I am every child in the classroom. I am the child in the corner who is afraid to be the new kid. I go out of my way to train my staff to make sure every single child feels cared for and strives in their performing arts education. I’m not perfect but my heart is always in the right place. The sky is the limit. Dreams do come true and winning MTCA is another dream come true!” said Tracey Ball.

About The Center Stage Studio:

This press release was issued on behalf of the news source, who is solely responsible for its accuracy, by Send2Press Newswire. To view the original story, visit: https://www.send2press.com/wire/modest-means-with-big-dreams-a-true-rag-to-riches-story/