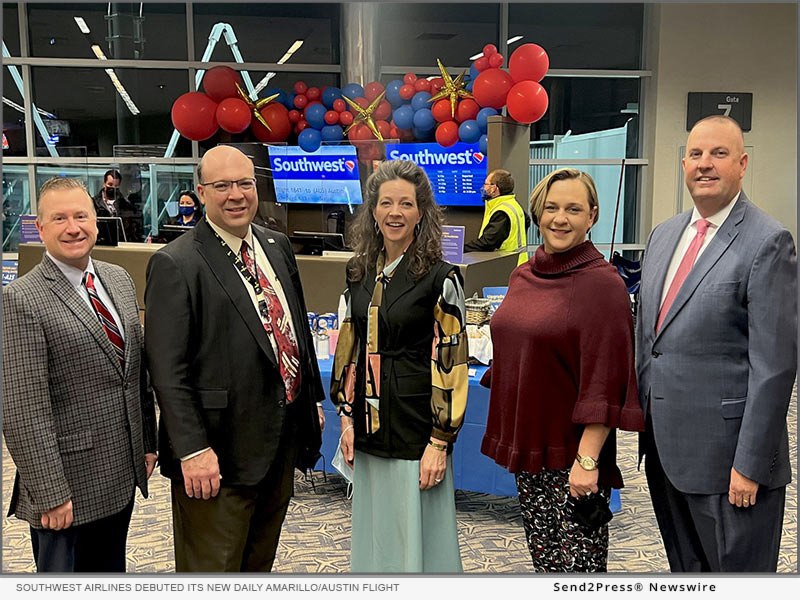 “The strong relationship between Southwest Airlines and the City of Amarillo goes back decades as Southwest has long been a major part of air travel for the entire Texas Panhandle,” said Amarillo Mayor Ginger Nelson. “The addition of this daily flight to the capital city of Texas not only shows Southwest’s impressive commitment to Amarillo, it also greatly expands the travel opportunities for the entire Amarillo area. The Amarillo economy is growing along with our population. The incredible vision of partners such as Southwest Airlines fosters our growth and allows us to provide the amenities our community needs to thrive and to be successful.”

“We are proud of the continued partnership with Southwest Airlines and excited for the nonstop flight from Amarillo to Austin,” said Jason Harrison, president and CEO of the Amarillo Chamber of Commerce. “The new service will not only help our community get into south Texas for personal travel but will allow our businesses an easy and efficient way to get to our state’s capital for business development, growth and lobbying efforts.

“Southwest Airlines continues to be an irreplaceable partner with our Taking Flight – Amarillo Initiative. We appreciate their continuing dedication in maintaining and growing travel options to and from Amarillo, now with the new Austin service.”

“For many years, Southwest Airlines has been instrumental in meeting the travel needs of Amarillo. Southwest’s willingness to add new flights to/from Amarillo during this time of great industry fluctuations and unknowns is a testament to Southwest’s trust in our partnership and the community. Southwest sees our community growth and the additional travel needs of our businesses as well as of our leisure travelers and has responded positively with this new flight to Austin and a new flight to Denver, Colorado (starting June 5),” said Michael Conner, Director of Aviation for Rick Husband Amarillo International Airport. “I know the community will take advantage of these great opportunities and support the future of air service here in Amarillo.

“A big thank you to the entire Southwest Team and our participating community leaders who helped to make this a reality and who continue to amaze me with their contributions to our Taking Flight program. I look forward to many more years of service with Southwest here in Amarillo.”

For more information, contact City of Amarillo Communications Manager Dave Henry at (806) 378-5219 or by email at David.Henry@amarillo.gov.

This press release was issued on behalf of the news source, who is solely responsible for its accuracy, by Send2Press Newswire. To view the original story, visit: https://www.send2press.com/wire/southwest-airlines-new-amarillo-to-austin-flight-takes-off-today/