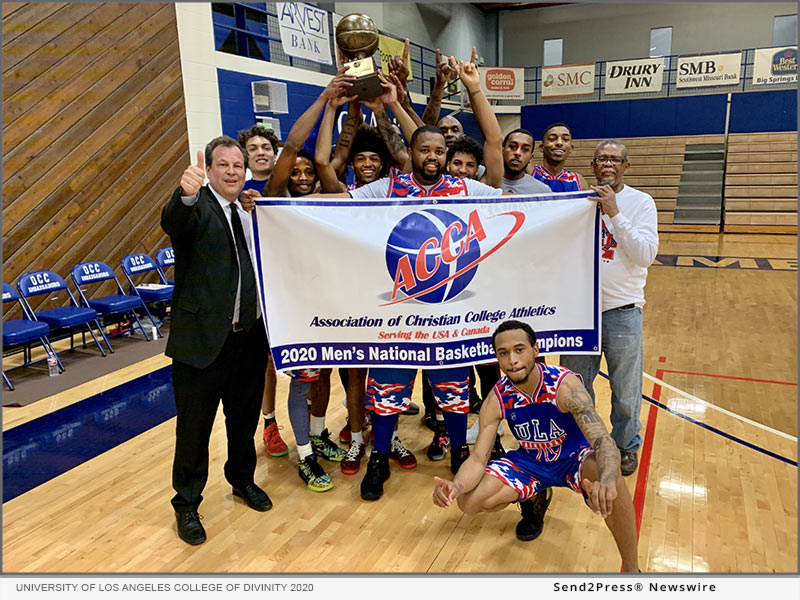 LOS ANGELES, Calif., Jun 27, 2022 (SEND2PRESS NEWSWIRE) — The University of Los Angeles College of Divinity (ULACD) basketball team, led by one of California’s most successful high school and college coaches, Michael Miller, posted the second-best record in the nation of any four-year college over the last four years.

From 2018-2022, ULACD, which is located in Compton, California and plays as an independent, produced a record of 105-8, for a winning percentage of 93%. Only Northwest Missouri State, which plays in NCAA Division II, had a better record during the same four-year span at 126-8 (94%).

While ULACD shattered all winning records in the state of California during the last four-years, their most amazing achievement has been playing in the last three ACCA National Championship games. They won the 2019-20 ACCA National Championship, and were runner-ups in 2020-21 and 2021-22. During the 2019-2020 season ULACD produced their best record (30-1) while winning the ACCA National Championship, defeating a very well coached Ozark Christian College on their home floor 97-89 on March 7, 2020. In the victory, Coach Miller made history by becoming the first coach to coach a high school state title team (Ribet Academy 1990-91), a junior college state title team (Los Angeles City College 1996-97 and 2002-03) and a national title team.

Coach Miller has won where ever he has coached. Miller was the first head coach to lead a high school team and a junior college team to a state title. While at Los Angeles City College, from 1992-2007, Miller had a record-breaking run of 14 consecutive conference championships. His LACC teams compiled an overall record of 241-38 from 1999-2007 for a winning percentage of .864, exceeding all NCAA Division I Programs during the same time.

This press release was issued on behalf of the news source, who is solely responsible for its accuracy, by Send2Press Newswire. To view the original story, visit: https://www.send2press.com/wire/ulacd-makes-college-basketball-history/